FOMC minutes from April 27-28 were just published here. I think I should take back some of my previous statements about the vague nature of FOMC statements. While there is vagueness in these minutes (of course, this is the Fed speaking), they are also revealing.

In case you were wondering why there was no mention in the FOMC statement for April 28 of decisions concerning the sales of mortgage-backed securities (MBS) and agency securities (Fannie Mae and Freddie Mac debt) currently on the Fed's balance sheet, that's because the FOMC did not make any. As you can see, there was a long discussion of asset sales, and opinions on the committee were all over the map. Some people want to simply let the assets mature (which will take a very long time - these are all mortgage related assets of course, so we are talking upwards of 30 years), others want to start selling the assets now, others want to wait until short-term interest rates start to increase, some want to sell all of the MBS and agency securities within 3 years, others want to take much longer, etc. Possibly Greece and credit market problems attracted most of the committee's attention, and they did not have time to resolve the issue.

There is still confusion on the committee about how monetary policy works, and what determines inflation, when the quantity of excess reserves in the system is positive. For example:

A couple of participants thought faster sales, conducted over about three years, would be appropriate and felt that such a pace would not put undue strain on financial markets. In their view, a relatively brisk pace of sales would reduce the chance that the elevated size of the Federal Reserve's balance sheet and the associated high level of reserve balances could raise inflation expectations and inflation beyond levels consistent with price stability or could generate excessive growth of credit when the economy and banking system recover more fully.

The participants clearly do not understand that a high level of excess reserves cannot in itself cause inflation. With a large quantity of positive excess reserves, asset purchases or sales are essentially neutral, and have no implications for inflation. The only issue has to do with the maturity mismatch on the Fed's balance sheet, which would dictate selling the MBS and agency securities sooner rather than later.

It is apparent from the minutes that the Fed is proceeding with plans to use term deposits and reverse repurchase agreements as tools of monetary policy. Note this passage:

The staff also briefed the Committee on recent progress in the development of reserve draining tools. The Desk was preparing to conduct small-scale reverse repurchase operations to ensure its ability to use agency MBS collateral. It also continued to work toward expansion of the set of counterparties for reverse repurchase operations. The staff noted that the Board had recently approved changes to Regulation D that would be necessary for the establishment of a term deposit facility.

This tells us how the Fed views these new tools, i.e. they "drain reserves." The Fed seems to be reluctant to part with its MBS and agency securities, and needs to finance this with reserves, but it seems worried that the reserves will somehow escape and cause inflation. Now, this is very confused thinking. First, reverse repos can only be more costly than actually selling MBS outright. I'm sure securities dealers will be quite happy to get the Fed's business to roll over reverse repos in MBS every day, but the Fed would be much better off if it just unloads the MBS. With regard to term deposits, this is just going to work in a perverse way. For example, suppose the Fed wants to induce the banks to hold a $1 trillion in excess reserves. How do they do it? First, the Fed could set the interest rate on reserves to induce the banks to hold $1 trillion in their usual reserve accounts, and these reserves can be used during the day to make interbank transactions. Second suppose the Fed auctions off $500 billion in term deposits, and sets the interest rate on reserves so that the banks will hold the other $500 billion in their reserve accounts. Now, note that the term deposits cannot be used in interbank transactions - they are essentially locked up for a month, or whatever. Clearly, in the second case the Fed has made the total quantity of excess reserves less desirable for the banks to hold, and on average it will be paying a higher interest rate on the whole $1 trillion in the second case than in the first. The result is exactly the same, as the banks hold the reserves, but in the second case the Fed pays more for the reserves. How can this be useful? Indeed, think about this another way. Suppose we fix the average interest rate on reserves (including regular reserves and term deposits), and increase the fraction of reserves held as term deposits. What happens? Well, the price level goes up. The reserves are as desirable in terms of their payoff to the banks, but are less desirable, as less of them can be used in transactions. The banks want to hold less total excess reserves, i.e. the demand for outside money falls, and the price level must rise. I think the usual Old Monetarist logic is that term deposits are deflationary, which is obviously wrong!

Finally there are some issues in the minutes related to recent inflation. Note this passage:

Consumer price inflation was low in recent months; both headline and core personal consumption expenditures (PCE) prices were estimated to have risen slightly in March after remaining unchanged in February. On a 12-month change basis, core PCE prices slowed over the year ending in March, with deceleration widespread across categories of expenditures. In contrast, the corresponding change in the headline index moved up noticeably, as energy prices rebounded.

Ever since the 1970s, apparently, we have been paying some attention to price measures which leave out prices that are viewed to be volatile. Why this practice persists, I have no idea. We might argue similarly that there are some highly-volatile components of GDP that we would be better off ignoring. Then, the recession does not look so bad, if we take out the volatile components, principally investment and consumer durables. Indeed, we might justify just looking at "core GDP," which might be consumer expenditure on services and non-durables. Of course this would be silly, but it's the same silliness that tells us we should ignore volatile components of the CPI.

Now, for anyone who thinks that preemptive tightening in monetary policy (i.e. increases in the interest rate on reserves) is appropriate now, the recent CPI numbers would give one pause. Since January 2009, the seasonally adjusted CPI has increased on average at about 2.1% per annum, and this CPI measure was essentially flat between March and April 2010. Here's something interesting that I noticed. If you look at the seasonally unadjusted CPI, it increased on average at about 2.6% per annum since January 2009, and the last monthly increase was about 2% at an annual rate. Now, there was a large drop in the implicit anticipated inflation rate that I can read from TIPS bond yields, that occurred on the day of the most recent CPI release. This may have had something to do with Europe as well, but the timing would make us think that the bond traders are looking at the seasonally adjusted CPI, and thought this was important news that the monthly inflation rate was down to zero.

The CPI must be pretty messed-up seasonally. Think about how the basket of goods purchased by the average consumer varies over the seasons, and how prices vary. There aren't any Christmas trees sold in August, fresh blueberries are very expensive (and the quantity sold very low) in the winter, and beach houses are not being rented out in Cape Cod in the winter. But the basket used to calculate the CPI is fixed year-round, as far as I know. How can we attach any significance to a one-month change in the CPI, whether it is seasonally adjusted or not? The most recent data might indeed reflect actual inflation of 2% or more - there could easily be an anomaly created by how the seasonal adjustment was done.

Now, suppose that we think that recent inflation measures (say seasonally adjusted CPI inflation) are accurate. How do we explain the recent inflation experience? Consider the following possibilities. 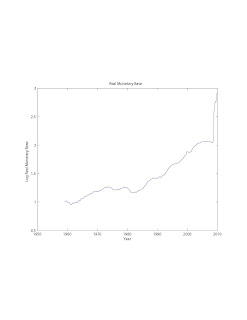 This shows the log of the real monetary base - given the huge recent increase, this certainly doesn't look like a time series that could have been generated by some stable demand function for base money.

2. Alternatively, consider Phillips curve explanations. Now, suppose that I forecast inflation next quarter as inflation in the current quarter. New Keynesian Phillips curve logic tells me that the forecast error I make should be positively correlated with the output gap. In the next two figures, I plot this forecast error against the output gap (measured as the Hodrick Prescott deviation from trend in real GDP) for the 1947-2010 data (up to first quarter 2010) and for 2007-2010. In both figures, my eyeball tells me the correlation is zero. So much for the Phillips curve. By the way, it does not particularly matter how I measure the output gap here, though I'm sure a dishonest Keynesian could find a positive correlation. 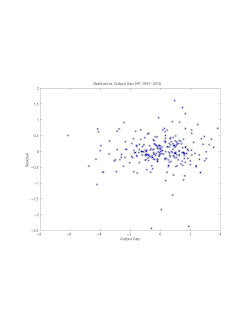 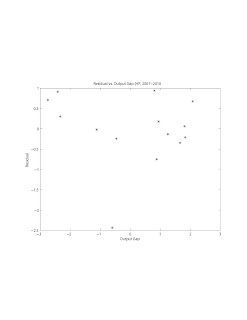 3. Now, if you think like I do, you would say that inflation is determined, basically, by the supply and demand for currency. In the next figure, I show the log of the real currency component of M1. You can see that the quantity of currency in real terms dropped substantially beginning in the late 1960s, and then stabilized in the mid-1990s. Other than one small recent downward blip, the behavior of this time series is anything but anomalous. 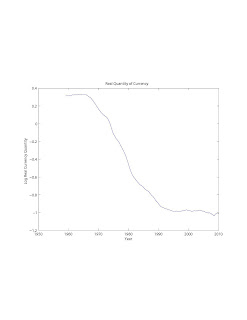 My point here is that the data is entirely consistent with the story I have been telling. The price level is determined by the demand and supply for currency - currency is where the rubber hits the road, basically. When there is a positive supply of excess reserves, and the demand for reserves falls, the nominal supply of currency has to rise, and the price level rises. Now, in spite of the fact that there may be a stable demand for U.S. currency, this is not going to help me forecast inflation. I don't know where in the world the currency resides, and I will have a very hard time estimating a demand function for the stuff. Given the realities of measurement, the Fed is better off setting an inflation target and then (under the current circumstances) manipulating the interest rate on reserves to hit the target.
Posted by Stephen Williamson at 12:33 PM