The recent behavior of commodity prices seems to have provoked a politically-infused controversy over how this behavior relates to monetary policy. Let's see if we can find the light amid the heat.

In some kinds of monetary systems, commodities play critical roles. Indeed, in the earliest monetary systems, scarce metals - typically gold and silver - were the medium of exchange. At the time, such commodity money systems were efficient, as gold and silver were difficult to replicate (counterfeiting was costly), and were relatively portable. The cost of such systems, however, was the diversion of resources (gold and silver) from private use. Further, making very large or very small transactions, for example in gold, could be difficult. Large transactions could involve a very heavy and bulky quantity of gold, while a small transaction might require such a small quantity of gold that divisibility would be a problem.

With the advent of technologies to thwart the counterfeiting of paper currencies, the designers of monetary systems took the next step, which was the adoption of commodity-backed paper money. Under such systems, for example the gold standard, some governmental institution stood ready to exchange a commodity for money at a fixed price. Under some conditions this could lead to price stability. For example, if the central bank fixes the price of gold at $1000 per ounce, and there is pressure for prices to rise, people will want to buy gold from the central bank at a low price and make a profit selling it at a higher price. In the process, the quantity of money in circulation falls, and prices fall. The problem here is that, while the price of gold is fixed with respect to money, the price of gold need not be fixed relative to the prices of other goods. Indeed, if there is an increase in the demand for gold for consumption purposes relative to other goods and services, the relative price of gold must rise, which means the prices of other goods and services in terms of money will fall, and there will be a deflation. Similarly, if new technologies come on line that lower the cost of digging gold out of the ground, this lowers the relative price of gold and leads to an inflation. Thus, while a gold standard has the advantage of keeping monetary policy out of the reach of misguided or ignorant policymakers, the price level will fluctuate due to demand and supply factors in the market for gold, and this will be harmful.

Modern fiat money standards therefore have advantages. Currency can be produced at relatively low cost, central banks are able to control inflation and inflation variability in the face of fluctuations in the relative prices of commodities, and individual countries can, if they wish, pursue independent monetary policies. Of course, under a fiat standard we have to trust the people who set the rules within which our central bank operates, and we have to trust the people who make monetary policy and implement it.

Two Republicans who will have significantly more power over economic policy in the new Congress, and who are also on the record as showing an interest in the role of commodities in the monetary system, are Ron Paul and Paul Ryan, both in the House of Representatives. I have not read Ron Paul's book "End the Fed," but part of the program he advocates in that book is a return to the gold standard. Ron Paul's ideas are not completely crazy. That some central banking functions - for example the issue of currency and the operation of the payments system - could be taken over by the private sector, are issues that are debated seriously by monetary economists. However, in the case of the gold standard, the appeal to Ron Paul, and to other gold bugs who have advocated the idea from time to time, seems more like the appeal of horses and buggies to the Amish rather than anything to do with sound economics. As discussed above, volatility in the relative price of gold makes a gold standard perform poorly.

Paul Ryan is on record as an advocate of commodity price targeting by the Fed. I have not been able to find a place where Ryan has written this down in detail, but the idea seems to be that the Fed should target the rate of increase in the price of some basket of commodities. This is something like a commodity standard, but does not involve the Fed holding any claims to gold, silver, pork bellies, wheat, or whatever is contained in the commodity basket. Of course, Ryan's proposal has the same disadvantages as does the gold standard. Commodity price indexes are well-known to be highly volatile relative to consumer prices, for example, and commodity prices are volatile because of demand and supply factors that are idiosyncratic to those markets. Thus, while it may be feasible for the Fed to target commodity price inflation, this would serve only to make consumer prices and interest rates much more volatile than is currently the case - a very bad idea.

Now, what has been happening to commodity prices recently? 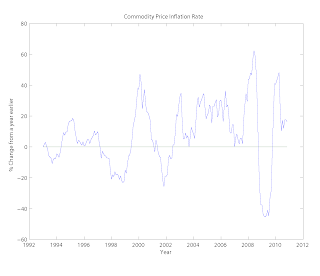 The chart shows the year-over-year percentage change in a commodity price index for the period January/92 to November/10. The first thing to note is that the 12-month growth rates in this index show volatility on the order of what we see in stock price indexes, and for good reason. Physical commodities are storable, and therefore they are assets. We should expect then, that the prices of commodities should behave more like other asset prices, than like the prices of final goods and services. Indeed, over the pre-crisis period in the chart, the rate of change in the commodity price index goes from -20% to well over 40%, back to the neighborhood of -20%, up again to the 30% range, down to 0, and up to more than 60% per annum, during a period where consumer price inflation, by any measure, was quite stable.

Right now, rising commodity prices are basically the result of global recovery. They have no bearing, one way or another, on U.S. monetary policy. For this is a global story; at a fundamental level, it’s not about us.

This approach eased financial conditions in the past and, so far, looks to be effective again. Stock prices rose and long-term interest rates fell when investors began to anticipate the most recent action. Easier financial conditions will promote economic growth. For example, lower mortgage rates will make housing more affordable and allow more homeowners to refinance. Lower corporate bond rates will encourage investment. And higher stock prices will boost consumer wealth and help increase confidence, which can also spur spending. Increased spending will lead to higher incomes and profits that, in a virtuous circle, will further support economic expansion.

So, if Bernanke is right and QE2 acts in part by increasing asset prices, it should increase commodity prices. Commodity prices of course started their recent increase in September of this year, at a time when it had become clear that QE2 was coming, so it seems hard to dismiss US monetary policy, as Krugman does, as a cause of the recent commodity price run-up.

Now, what is causing the run-up in commodity prices is in fact critical for US monetary policy. First, suppose that, as Krugman suggests, the current commodity price inflation is due only to changes in the world demand for commodities. In fact, he appears to be arguing that the relative price increases are in part permanent. This then would be an instance where focusing on core measures of inflation is a bad idea. If we are experiencing permanent increases in the relative prices of energy and food, and our target inflation rate is 2%, we should be tolerating a core inflation rate of less than 2%. In that case, the goal of QE2 of increasing the core inflation rate seems wrongheaded. Second, suppose that the increases in the US dollar prices of commodities are the result only of QE2 (and anticipated QE2). Then, judging from history, the run-up in commodity prices is not such a big deal. This is just the beginnings of a widespread increase in general inflation, which is what we want anyway.
Posted by Stephen Williamson at 8:28 AM