FOMC Statement, December 14, and the Recent Increases in Bond Yields

The FOMC met this week, and released this statement yesterday. There is essentially no news here. The FOMC will proceed with QE2 as planned, and the same language remains concerning the continual review of the asset purchase program, in light of new information.

An aspect of conventional Fed policymaking was that one could always see the results in the data. The FOMC would announce a change in the fed funds rate target, and they would typically hit the target, give or take a few basis points. The QE2 program is quite different. The program was announced in terms of specific quantities of long-term Treasury securities to be purchased over a particular period of time, and as I discussed here, that is unfolding according to plan. The ultimate goals of the program are two: (i) to increase the inflation rate; (ii) to increase aggregate economic activity. It is clear, from the statements of Bernanke and other Fed officials, that the way they see the mechanism working, in accomplishing the second goal, is through a lowering of long-term bond yields. For example, this piece of Charles Plosser's most recent speech (which otherwise expresses skepticism about what can be achieved with QE2) is representative:

Chairman Bernanke has stated that the intention of the current program is “to support the economic recovery, promote a faster pace of job creation, and reduce the risk of a further decline in inflation.”1 Proponents expect the security purchases to lower longer-term interest rates through a portfolio balance effect. That is, as the supply of longer-term Treasuries available to the public is reduced, prices of Treasuries should rise, which means yields should fall, to induce the public to willingly hold the reduced supply. Yields on similar assets are expected to fall as the public rebalances portfolios away from the asset with reduced supply toward other similar assets. Just as in conventional monetary policy, lower interest rates would stimulate business and consumer demand and increase exports, thus lending support to the recovery.

Since "proponents" argue that QE2 will work through reductions in long bond yields, clearly they would like to see those reductions in the data. But, as is evident to everyone, including the NYT, bond yields have gone up, not down. 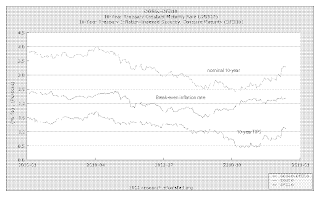 The top line in the chart (sorry for the crappy chart, by the way) is the nominal yield on 10-year Treasuries. Encouragingly for the Fed, this rate fell in the period when it was becoming clear that the Fed would embark on some kind of quantitative easing program, leading up to the November 3 QE2 announcement. Better still, the 10-year TIPS yield, the bottom line in the figure, fell during this period, and by more than the nominal yield. We can take the 10-year TIPS yield as a measure of the real rate of interest over a 10-year period, which is what the FOMC proponents of QE2 would think of as the real rate of interest relevant for influencing economic activity. Note as well that the break-even inflation rate (the inflation rate required to equate realized rates of return on nominal bonds and TIPS - the difference beween the nominal bond yield and the TIPS yield) rose over the period leading up to November 3. This is even better for the Fed, as it reflects an increase in inflationary expectations.

Now, what has happened since November 3? The break-even inflation rate has stayed roughly constant, but both the nominal bond yield and the TIPS yield have increased substantially. Is this an embarrassment for the Fed or not? At the minimum, this could indicate that it is not feasible for the Fed to target a long-term bond rate. The argument against that view is that the Fed actually was able to peg long-term bond rates in the period prior to the Treasury-Fed Accord in 1951, but maybe circumstances are different now. In any event, presumably all that the proponents of QE2 should care about is that they can lower real bond yields below what they would otherwise be. What could be driving up long bond yields then?

1. People are more optimistic about future aggregate economic activity. Standard theory tells us that, if we expect aggregate income to be higher in the future, we want to borrow against that future income, increasing the demand for credit, and real interest rates then have to increase. Certainly we have had some good news, for example there was an upward revision in third-quarter real GDP growth, and retail sales growth has been strong. On the down side, industrial production and employment have been anemic, and housing starts are still in toilet. This seems like a wash to me. Keynesians might add, however, that the likely extension of the Bush tax cuts, extension of unemployment insurance, and other temporary tax cuts, will add stimulus. More on this below.

2. The world demand for US Treasuries is falling. The World as a whole is recovering well. The back pages of the December 11-17 issue of The Economist tell me that world economic growth is back to pre-crisis levels, and is expected to be about 4% for 2010. In spite of continuing sovereign debt problems in Europe, the flight to quality is over, there are now better private substitutes for public liquidity, Treasury prices are falling, and Treasury yields are rising. I think this could be a big part of what is going on.

3. The increase in bond yields reflects a higher default premium. The tax bill making its way through Congress will contribute to a higher government deficit and a larger quantity of government debt. Further, there are no serious plans for medium or long-term deficit reduction. Therefore, lenders may want to extract a larger default premium from the US government. I don't think there is anything to this. The US government will inflate the debt away and default on it implicitly before they default explicitly. Note that there has been no increase in the break-even inflation rate, i.e. no increase in inflation expectations, recently, so there is no indication that lenders are anticipating implicit default on US Tresuries, let alone the explicit kind.

4. Higher deficits increase interest rates. Ricardian equivalence tells us that any reduction in current taxes is offset by higher future taxes (government spending held constant), with no net effect on private wealth. As a result, nothing happens. Consumers simply save the tax cut. We all know, however, that credit market frictions, wealth redistribution, and the distorting effects of taxes all make a difference. Of course, there is no escaping the intertemporal government budget constraint. We should always think of a government deficit as deferred taxation. In any event, to the extent that elements of the tax program relax credit constraints (through extension of unemployment insurance benefits, for example) this can put upward pressure on interest rates.

What's the conclusion? I think that the yields on US Treasuries are currently being driven mainly by the demand for Treasuries outside the US, and that these other factors are minor (1 and 4) or inconsequential (3).
Posted by Stephen Williamson at 7:37 AM