All these purchases are settled through the banking system, with the result that depository institutions now hold a very high level of reserve balances with the Federal Reserve.

He is being a little cagey here. From the week of November 3 to the week of February 2, the Fed increased its holdings of securities by about $194 billion, actually somewhat short of the planned increase of about $225 billion over that period. Further, due to offsetting effects on the asset side of the Fed's balance sheet due to the unwinding of the New York Fed's interaction with AIG, and offsetting increases in the balances held in Treasury reserve accounts, reserves of private financial institutions increased over this period by only about $96 billion. Thus, while it is true that reserves are at a very high level historically, the net increase in reserves since the beginning of the QE2 operation is only about half the increase in securities held by the Fed. This is certainly not due to an increase in currency outstanding, as currency increased by a modest $13 billion, or about 5% at an annual rate.

Then, there is an attempt to convince us that QE2 is really just business as usual.

Although large-scale purchases of longer-term securities are a different monetary policy tool than the more familiar approach of targeting the federal funds rate, the two types of policies affect the economy in similar ways.

This seems a stretch. I don't think anyone at the Fed can say with a straight face that we have a good theory for how or if QE2 will work, or that they understand the quantitative effects. Pre-financial crisis, the purchase of $600 billion in Treasury securities, of any maturity, over an 8-month period would have been considered ludicrous.

Bernanke then claims success. What is the evidence?

1. The stock market went up. It's hard to argue this one way or the other, so I guess you have to give Bernanke this one. However, this is a dangerous game. If the stock market goes down, then Bernanke owns it. First Law of Central Banking: Don't claim credit for something you can't control. 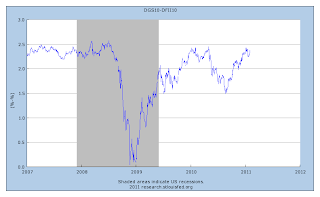 Yields on 5- to 10-year Treasury securities initially declined markedly as markets priced in prospective Fed purchases; these yields subsequently rose, however, as investors became more optimistic about economic growth and as traders scaled back their expectations of future securities purchases.

Suppose we focus just on 10-year Treasuries, for simplicity. The next chart shows the 10-year nominal Treasury yield and the 10-year TIPS yield. 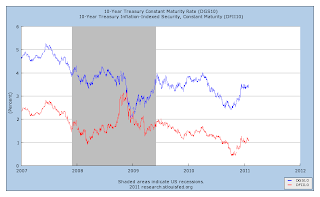 The TIPS yield is higher than when the QE2 purchases started, and the nominal bond yield is much higher. Now, we should be primarily interested in the TIPS yield in evaluating Bernanke's policy, since he describes the process by which QE2 could affect real activity as working through real long-term interest rates, which are to some extent captured in the TIPS yields. Of course we can't conclude much from looking at the chart, as there are a lot of things changing over this period in addition to monetary policy. In the quote above, Bernanke tries to make the best of it though. He claims credit when bond yields go down, and argues that other factors swamp the monetary policy effect when yields go up. He can't quantify the effect though, as there is no solid theory to go on. In any event, this is another dimension on which the Fed is not conducting business as usual. In normal times, the Fed commits to a fed funds rate target, and it can come quite close to the target, rain or shine. Currently, the Fed says it wants long bond rates to fall, but this is something it has not delivered. See the First Law of Central Banking, above.

Bernanke finishes with an attempt to provide assurance that the Fed can tighten when the need arises.

In particular, it bears emphasizing that we have the necessary tools to smoothly and effectively exit from the asset purchase program at the appropriate time. In particular, our ability to pay interest on reserve balances held at the Federal Reserve Banks will allow us to put upward pressure on short-term market interest rates and thus to tighten monetary policy when required, even if bank reserves remain high. Moreover, we have developed additional tools that will allow us to drain or immobilize bank reserves as required to facilitate the smooth withdrawal of policy accommodation when conditions warrant. If needed, we could also tighten policy by redeeming or selling securities.

Here, Bernanke does not put enough emphasis on the interest rate on reserves, which is actually the key policy instrument of the Fed under current circumstances. The "additional tools" (reverse repos and term deposit reserve accounts) would actually serve no purpose at all, given the large stock of reserves outstanding. One thing Bernanke does not comment on (as it would raise questions about the Fed's independence from the Treasury) is the current "reserve drain," or "immobilization," of about $300 billion due to balances in the Treasury's reserve accounts with the Fed.
Posted by Stephen Williamson at 6:47 PM