As an economic historian, Christina Romer did some useful and interesting things. A well-regarded piece she wrote is this one which, in the 1980s, challenged conventional views about business cycle volatility. At that time, conventional wisdom was that volatility in aggregate economic activity in the United States was much higher in the pre-World War II period than after. That conventional view was certainly consistent with Old Keynesian ideas about policy intervention. Keynesians wanted us to think that post-World War II macroeconomic policy, enlightened by Keynes, Hicks, Samuelson, Tobin, and others, had served us well. Before Christian Romer's work, existing measurement told us that volatility in real GDP was smaller after World War II, consistent with the efficacy of active stabilization policy.

Romer did a careful job of the historical measurement, and found that much of the difference in pre-WWII and post-WWII volatility found by others could be explained by measurement error. The result was all the more striking for its intellectual honesty, coming from a committed Keynesian who had come out of a strongly Keynesian academic environment (MIT Economics Department in the 1980s).

I was reading the Sunday New York times and ran across this, which made me quite happy (for the state of the world) that Christina Romer was back to doing economic history and no longer trying to guide macroeconomic policy in the Obama administration.

Romer's NYT piece, and what I will discuss here, serves as a useful bookend to what I wrote here on her fiscal policy views, which are very much in line with Krugman's, i.e. the no-amount-of-intervention-is-too-much school.

Romer first wants to tell us that the old "hawks vs. doves" characterization of FOMC decision-makers is no longer relevant. Apparently everyone is now a hawk. Now, that does not seem right. It seems to me that what people mean by "dove" is "Keynesian." On the FOMC, Janet Yellen, Eric Rosengren, Charles Evans, and Bernanke himself are clearly Keynesian. Yellen and Rosengren are more Old Keynesian, and Bernanke and Evans are more New Keynesian. Yellen/Rosengren/Evans/Bernanke were likely the serious force behind the Fed's mortgage-backed securities purchases and the recent QE2 operation. Seems to me there are plenty of doves in sight.

So, if "hawks and doves" does not work so well as a characterization of FOMC members, what is Romer's alternative? Apparently these people are either empiricists (translation: good people) or theorists (translation: bad people). In academic life, it would be fairly easy to take individual published articles and classify them as theory or empirical, i.e. quantitative work. We are not going to find much quantitative work in the Journal of Economic Theory (though there is some), and not much pure theory in the Review of Economics and Statistics. Of course, one cannot do good empirical work without theory to put structure on it, and one does not do good theory for the sake of amusing oneself (we hope) but to ultimately explain how the world works and possibly to permit the design of better economic policy.

Clearly any good macroeconomic policymaker has to be thinking about theory and empirical work. He or she has to have a good grip on macroeconomic measurement (available data and the quality of that data), empirical macroeconomic research, and theory. One cannot hope to contribute to the policy discussion and aid in making decisions without walking both sides of the fence. Now, I think what Romer wants us to think is that people like Charles Plosser, Narayana Kocherlakota, Jeff Lacker, and Jim Bullard, for example, are theorists, i.e. bad guys, who have their heads in the clouds. I know all of those people well, and nothing is further from the truth. Kocherlakota for example has an excellent grip on most of what is useful in modern economics. As an academic, he did quantitative work (he can estimate and calibrate) and high-end theory, and he can articulate cutting edge economic ideas in a straightforward way to lay people and other policymakers. Plosser/Koherlakota/Lacker/Bullard have all proved to be effective leaders and decision-makers who have put to work the ideas they absorbed as economic researchers and teachers.

Well, what are the ideas that Romer has in mind? What do the good people (the empiricists), have to offer? Here we go:

Empiricists, as the name suggests, put most weight on the evidence. Empirical analysis shows that the main determinants of inflation are past inflation and unemployment. Inflation rises when unemployment is below normal and falls when it is above normal.

Now, Romer is writing for a lay audience here, so it might be useful to recall this quote from Richard Feynman, which I included in my last post:

I would like to add something that's not essential to the science, but something I kind of believe, which is that you should not fool the layman when you're talking as a scientist.

I know about research by Andy Atkeson and Lee Ohanian that finds, in contradiction to what Romer states, that once we know past inflation, knowing unemployment does not help us forecast future inflation. As well, Romer is not filling the layman in on the fact that there is a long line of research in macroeconomics that attempts to sort out the Phillips curve relationship that is at the heart of her argument. The upshot of that research is that the empirical Phillips curve relationship is in the data for some time periods and not for others, and that (New Keynesian economics notwithstanding) the sometimes-observed Phillips curve is not a structural relationship. Romer discusses this as if she knows what a "normal" unemployment rate is, which any good economist knows she doesn't.

As a confirmed empiricist, I am frustrated that the two sides have been able to agree only on painfully small additional aid for a very troubled economy.

Romer has come to the conclusion that the planned purchase of $600 billion in long-maturity Treasury securities by the Fed is somehow not enough, and "painfully" not enough, and she is willing to state that in the Sunday New York Times. What would be enough then? Would $800 billion work? Would $2 trillion work? What is the objective exactly? At one time an expansion in the size of the Fed's balance sheet of this magnitude would have been considered ludicrous. How does this work differently? Does confirmed empiricism involve making guesses based on how you feel when you wake up in the morning, or what?

The confirmed empiricist tells us that:

[The Fed] could set a price-level target, which, unlike an inflation target, calls for Fed policy to take past years’ price changes into account. That would lead the Fed to counteract some of the extremely low inflation during the recession with a more expansionary policy and lower real rates for a while.

Unfortunately for Romer's argument, a price-level targeting approach will not necessarily give her the conclusion she seems to want. 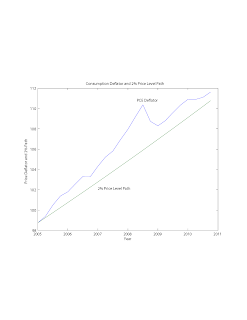 And any [of her alternatives] would be better than doing too little just because some Fed policy makers believe in an unproven, theoretical view of how inflation works.

Of course Romer's theoretical view is pretty much that of Samuelson and Solow, from 1960. Apparently the Fed can increase the inflation rate only by reducing the unemployment rate, and moving the economy up the Phillips curve.

Romer says some things about economic history in her piece, but of course she is very selective, and seems to want to ignore the period in US economic history and in macroeconomic thought that runs from about 1968 to 1985. Let's review that. (i) Samuelson/Solow and others think that the Phillips curve is a structural relationship - a stable relationship between unemployment and inflation that represents a policy choice for the Fed. (ii) Friedman (in words) says that this is not so. There is no long-run tradeoff between unemployment and inflation. It is possible to have high inflation and high unemployment. (iii) Macroeconomic events play out in a way consistent with what Friedman stated. We have high inflation and high unemployment. (iv) Lucas writes down a theory that makes rigorous what Friedman said. There are parts of the theory that we don't like so much now, but Lucas's work sets off a methodological revolution that changes how we do macroeconomics. One of the things we still like about Lucas's work is his "critique" paper, which tells us why we need theory to make good policy decisions. The key example from the Lucas Critique paper is the Phillips curve: treating an observed correlation in the data as structural can be bad. (iv) Paul Volcker takes Friedman seriously. Friedman had said that "inflation is everywhere and always a monetary phenomenon." The confirmed empiricists are skeptical. They seem to think that the Phillips curve is very flat, and that there will have to be a very long period of very high unemployment to bring the inflation rate down. Not so. Volcker engineers a severe monetary contraction and the ensuing recession is fairly painful, but not so long. Success! Inflation comes down quickly and has remained low since then.

What's missing from Romer's piece? It's the "inflation is everywhere and always a monetary phenomenon" part. Of course we have learned a lot since Friedman said that, about the practical implementation of monetary policy, and about monetary economics. Targeting the growth rate in some monetary aggregate does not seem to be a good idea. In the very short term, setting a nominal interest rate target for some overnight interest rate seems to work pretty well. When there is a large quantity of reserves in the system, swapping reserves for T-bills has essentially no effects. Monetary expansions that are planned to be reversed, and expected to be reversed, can have no effects. We know little, theoretically or empirically, about the effects of large purchases of long-maturity assets by the Fed under the current circumstances, but we are going to learn something about that soon.

Here's what I see in the recent data. The first chart is reserves, since the beginning of 2008, and the second is currency in circulation. The total of these two is total outside money, which is roughly the total quantity of Fed liabilities financing its asset portfolio. In the first chart we see a rapid runup in last few weeks in reserves. For reasons I discussed in other posts, the actions of the Treasury caused a lag in the effects of the QE2 asset purchases by the Fed on outside money, but those actions have been reversed. In the second chart, currency in circulation has increased substantially in recent weeks. 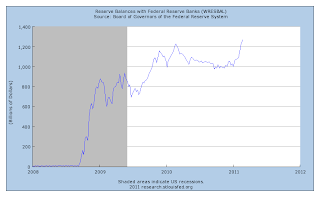 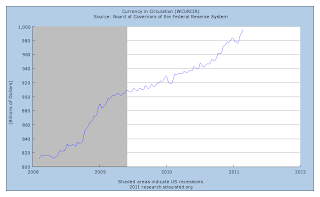