The US Labor Market

There appears to be some optimism given the employment report for February 2011. The unemployment rate dropped to 8.9%, and employment growth was firm. However, the labor force participation rate and employment/population ratio are at levels last seen in 1983. Though real GDP growth has been somewhat weaker than we might expect coming out of a deep recession, real GDP performance appears inconsistent with the very weak performance we are seeing in the labor market, given historical experience.

I ran across this this presentation by Narayana Kocherlakota, from a talk he gave at this conference, to what appears to be an audience of students, academics, and business people. You can watch the actual presentation, and see Narayana in professorial mode, explaining the current monetary policy predicament to people who apparently are at least up to speed in undergraduate-level economics.

Now, the basic model Narayana has in mind for organizing his thinking about labor market data and monetary policy is a kind of New Keynesian version of a Diamond-Mortensen-Pissarides (DMP)general equilibrium labor search model. Indeed, such a model has been set up and fit to data by Gertler, Sala, and Trigari. If you doubt that Narayana takes New Keynesianism seriously, read this. Now, in a model like Gertler/Sala/Trigari (GST), the "natural rate of unemployment" is well-defined. It is the dynamic path for the unemployment rate that is ground out by the model when it is subjected to some baseline series of exogenous shocks, when prices and wages are fully flexible. In the GST paper, Figure 7 shows the time series for the actual unemployment rate and the natural rate. For the experiment they did, the variability in the natural rate is quite small relative to variability in the actual unemployment rate. Conclusion? According to GST, the sticky price/wage mechanism is responsible for most of the cyclical variability in the unemployment rate. Now, these people are not doing some back-of-the-envelope calculation. This is a well-articulated model, it fits the data, and its parameters have been estimated using standard methods.

Alternatively, there is a literature that studies the properties of the DMP model absent New Keynesian frictions, including work by Andolfatto, Merz, Shimer, and Hagedorn and Manovskii. In the basic DMP model, there is not a lot to work with in terms of aggregate shocks. What Shimer considers are shocks to the separation rate (of matches between firms and workers) and to productivity. It is clear that separation rate shocks will not replicate even the qualitative cyclical features of the vacancy/unemployment rate data, so the question then is whether shocks to productivity of the magnitude observed in the data will replicate the variability and comovements of unemployment and vacancies we actually observe. Shimer's conclusion is that the answer is no.

What is the problem with the basic DMP model? Unemployment and vacancies are not variable enough in the model relative to what we observe. Why? In the DMP model, unemployment fluctuates in the face of productivity shocks due to changes in the job-finding rate driven by the behavior of firms. Higher productivity implies a higher surplus available in a match between a firm and a worker. Would-be firms respond to this profit opportunity by posting vacancies, which reduces labor market tightness, making it easier for an unemployed worker to find a job. Shimer saw the problem as being due in part to Nash bargaining, which implies that workers always receive a constant share of the surplus in a match. Some people (for example Robert Hall) have interpreted this as saying that there is too much real wage flexibility in the standard DMP model. However, Hagedorn and Manovskii say that is not correct. They argue for an alternative calibration of the DMP model, under which the typical surplus in a match is smaller, due to a higher threat point for a worker in the bargaining problem. Then, changes in productivity imply a much larger proportional change in the surplus, which gives a larger kick to vacancies when productivity changes.

Now, under the Hagedorn-Manovskii calibration, which seems to be a careful fitting of the model to the data, productivity shocks successfully predict the observed variability and comovements in observed unemployment and vacancies. In this case, there is effectively no deviation of the natural rate of unemployment from the actual unemployment rate. There is a bargaining inefficiency, but it would be hard to argue that monetary policy is about correcting bargaining inefficiencies. So, we have two very similar models, one with wage/price stickiness and one without, both fit carefully to the data, but with extremely different policy conclusions.

Narayana seems to fit somewhere between GST and Hagedorn/Manovskii. Like all good New Keynesians, he appears to think that the role of monetary policy is to correct sticky price distortions, but he's not quite sure how important they are in the current context. In his slides, you can follow his argument. He says that (i) the unemployment/vacancies ratio increased by a factor of about 2.5 from December 2007 to December 2010. (ii) In the DMP model, if match surplus had been unchanged, and given a fixed matching function, there should have been much more job creation recently than what we observed. (iii) He concludes that either (a) match surplus fell; (b) matching efficiency declined; or (c) sticky price/wage frictions are at work.

He does not seem to want to dismiss (a), arguing that taxes and extensions in unemployment insurance benefits could do the trick. This seems to me a very weak argument. There is strong evidence that tells us that match surplus has likely increased substantially. First, an important feature of the recession was the large increase in productivity that occurred. As I show here productivity is substantially higher than it would have been had it continued on the trend it was on before the recession hit. As well, in the chart, 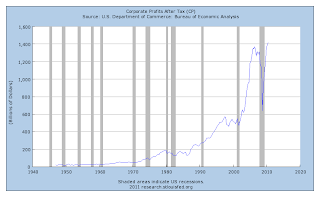 corporate profits (after taxes) are now higher than they were at their pre-recession peak. I think it is hard to argue that match surplus has not gone up substantially. Narayana seems to put a lot of weight on (c), but this also seems shaky, as his opinion is based on what appears to be Beige Book evidence on "deficient demand," whatever that is. Does Narayana have specific evidence that companies in the Ninth Federal Reserve District are shutting down because they cannot bear to reduce their prices, that unemployed people in Duluth are demanding wages that are too high, that companies in Bemidji are laying off workers rather than cutting prices to boost demand? Maybe the people who collect the Beige Book evidence are not asking the right questions.

Judging from the evidence I see, it seems the only way to reconcile the DMP model with the recent data is that there was a large decrease in matching efficiency. But that just tells us that this model is not going to be of much use in understanding our current predicament. What I argued here is that we need some better models with enough sectoral detail to capture what we mean by matching efficiency.
Posted by Stephen Williamson at 3:35 PM