The minutes for the FOMC meeting of April 26-27 were released today, and contain much more information than is usual. Typically, the minutes just give some background to the previously-released FOMC statement and, without names, or exact words spoken, they don't tell you a lot.

In this case, there is a detailed account of a discussion about "strategies for normalizing the stance and conduct of monetary policy." "Stance" refers to whether policy is tight or accommodative. By normalizing the stance, the committee seems to mean that, with an inflation target of 2%, a normal fed funds rate should be in the range of 3%-5%. Normalizing conduct seems to mean reducing the size of the Fed's balance sheet to the point where the quantity of excess reserves held overnight is zero.

It is clear that the Fed will have to tighten at some point, but how to do it?

The first key issue was the extent to which the Committee would want to tighten policy, at the appropriate time, by increasing short-term interest rates, by decreasing its holdings of longer-term securities, or both. Because the two policies would restrain economic activity by tightening financial conditions, they could be combined in various ways to achieve similar outcomes.

This comes from a presentation by the "staff," which I take to be the Board's staff. Apparently they think, in line with public statements by Bernanke and others, that there is some kind of equivalence between asset sales and increases in the Fed's policy rate, which is currently the interest rate on reserves (IROR). I guess they do not agree with this.

There are a set of principles here that the FOMC agreed to concerning policy normalization:

First, with regard to the normalization of the stance of monetary policy, the pace and sequencing of the policy steps would be driven by the Committee's monetary policy objectives for maximum employment and price stability. Participants noted that the Committee's decision to discuss the appropriate strategy for normalizing the stance of policy at the current meeting did not mean that the move toward such normalization would necessarily begin soon. Second, to normalize the conduct of monetary policy, it was agreed that the size of the SOMA's securities portfolio would be reduced over the intermediate term to a level consistent with the implementation of monetary policy through the management of the federal funds rate rather than through variation in the size or composition of the Federal Reserve's balance sheet. Third, over the intermediate term, the exit strategy would involve returning the SOMA to holding essentially only Treasury securities in order to minimize the extent to which the Federal Reserve portfolio might affect the allocation of credit across sectors of the economy. Such a shift was seen as requiring sales of agency securities at some point. And fourth, asset sales would be implemented within a framework that had been communicated to the public in advance, and at a pace that potentially could be adjusted in response to changes in economic or financial conditions.

There is of course some vagueness here. What do they mean by "intermediate term?" Is this a year or two, or five to ten? I like the idea that the FOMC thinks it is important to get back to Treasuries-only asset holdings. The plan for asset sales looks basically like QE1 in reverse.

In the discussion, again, members of the FOMC are convinced that asset purchases or sales matter when there is a positive quantity of excess reserves in the system:

Most participants indicated that once asset sales became appropriate, such sales should be put on a largely predetermined and preannounced path; however, many of those participants noted that the pace of sales could nonetheless be adjusted in response to material changes in the economic outlook. Several other participants preferred instead that the pace of sales be a key policy tool and be varied actively in response to changes in the outlook.

For me, this was the most puzzling part of the minutes:

Most participants saw changes in the target for the federal funds rate as the preferred active tool for tightening monetary policy when appropriate. A number of participants noted that it would be advisable to begin using the temporary reserves-draining tools in advance of an increase in the Committee's federal funds rate target, in part because doing so would put the Federal Reserve in a better position to assess the effectiveness of the draining tools and judge the size of draining operations that might be required to support changes in the interest on excess reserves (IOER) rate in implementing a desired increase in short-term rates. A number of participants also noted that they would be prepared to sell securities sooner if the temporary reserves-draining operations and the end of the reinvestment of principal payments were not sufficient to support a fairly tight link between increases in the IOER rate and increases in short-term market interest rates.

The "reserve-draining tools" are reverse repurchase agreements and term deposits. As I have argued elsewhere, these are not additional instruments in the Fed's box of tools, and with both the Fed has lower-cost means of accomplishing exactly the same thing. The Fed can sell assets outright rather than engaging in reverse repos, and the interest rate on a term deposit with the Fed cannot be smaller than the IROR that a financial institution requires to hold the same quantity of funds for the same period of time in its reserve account. 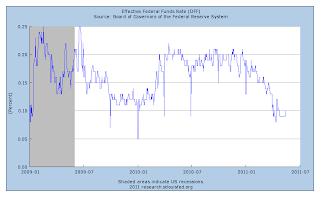 With the IROR at 0.25%, one would think that arbitrage would dictate that fed funds also trade at 0.25%, but due to the fact that the GSEs do not receive interest on reserves, and because of some heretofore unexplained friction, the fed funds rate (see the chart) has typically been less than 0.25%. Further, during the QE2 period, the effective fed funds rate fell from around 0.2% to 0.1%. This is interesting, as it seems to indicate that the quantity of excess reserves in the system has something to do with the gap between the IROR and the fed funds rate. In any case, I don't see this as a big concern. It is unlikely that the gap will increase as the IROR goes up, and it should fall as assets are sold.

Finally, in the discussion concerning the policy decision, we get this:

In their discussion of monetary policy, some participants expressed the view that in the context of increased inflation risks and roughly balanced risks to economic growth, the Committee would need to be prepared to begin taking steps toward less-accommodative policy. A few of these participants thought that economic conditions might warrant action to raise the federal funds rate target or to sell assets in the SOMA portfolio later this year, but noted that even with such steps, monetary policy would remain accommodative for some time to come. However, some participants indicated that underlying inflation remained subdued; that longer-term inflation expectations were likely to remain anchored, partly because modest changes in labor costs would constrain inflation trends; and that given the downside risks to economic growth, an early exit could unnecessarily damp the ongoing economic recovery.

This does not make it look like tightening is coming any time before the end of the year. Most of the FOMC members seem to be hoping that the increases in headline inflation are temporary, they have strong faith in Phillips curves, or both.
Posted by Stephen Williamson at 6:17 PM