Milton Friedman told us that "inflation is always and everywhere a monetary phenomenon," but that statement is so loose that it can only be suggestive. What is money anyway? If we know what money is, can observing its behavior help us predict inflation? If we have more or less inflation than we would like, do time series observations on the stock of money help us to get us where we want to go?

Among Old Monetarists (or quantity theorists), led by Friedman, the standard view was that money should include all media of exchange (more or less), and that the key factor guiding our choice of an appropriate monetary aggregate be the existence of a stable, parsimonius demand function for that monetary aggregate. Friedman argued in his 1968 AEA Presidential address, that central banks should target the growth rate in some monetary aggregate. Note that he also argued that targeting the price level would be a bad idea, as it would lead to instability. Current conventional wisdom appears to be just the opposite. Central banks that jumped on the money-targeting bandwagon in the 1970s and 1980s subsequently jumped off, and some of them adopted explicit inflation targets.

Modern central banking (under normal circumstances) typically amounts to setting some target for an overnight interest rate, with the central bank intervening over the very short run (a few weeks) to hit that target. Decisions about changes in the target are made based on recent inflation experience, recent real economic activity (particularly in the US, where there is an explicit "dual mandate"), and forecasts. This operating procedure appears to work well, in part due to substantial instability in the demand for means of payment at the retail level and among financial institutions.

How does a New Monetarist think about money and inflation? Certainly inflation is always and everywhere a monetary phenomenon. The prices of goods and services, and the full array of asset prices and interest rates, are the terms on which we collectively hold the existing stocks of assets. The quantities of assets used extensively in transactions involving goods and services must have primary influence on the prices of goods and services. However, attempting to add up some asset quantities, calling the total "money," and then attaching some significance to that total, seems like a pointless exercise. For example, an Old Monetarist might add currency and reserves together and call the total "outside money," but of course most of the $1.5 trillion in reserves now outstanding in the United States just sit overnight, and are not used in transactions of any sort. Indeed, US Treasury bills currently have a greater claim to membership in the "money" club, as they are much more useful in financial transactions than are reserves, at the margin.

For a New Monetarist, the most fruitful way to think about a central bank (as might be obvious) is as a financial intermediary. Central banking then must matter to the extent that the central bank has some specific advantages relative to private financial intermediaries. These advantages stem from the central bank's monopoly over currency issue, and its payment system monopoly, whereby reserve accounts are the primary vehicle for settling debts among financial institutions. Under current circumstances, it is the stock of currency that matters, and reserves matter to the extent that they are convertible one-for-one into currency. Currency can be withdrawn by a financial institution from its reserve account just as you withdraw cash from your checking account at the ATM.

As I argued here and here, open market operations by the Fed in US Treasury debt are currently essentially irrelevant. When the Fed is holding a positive stock of excess reserves, and paying interest on those reserves, it should be obvious that traditional swaps of reserves for T-bills have no effect. There is essentially a liquidity trap, no matter what the interest rate on reserves (IROR) is. What is not so obvious is that this also applies to swaps of reserves for long-maturity Treasury securities, since the Fed is no better at transforming long Treasuries into overnight liabilities than is the private sector.

Thus, the $1.5 trillion in reserves currently outstanding in the US do not represent any more of an inflation threat than if the Fed were holding $1.5 trillion less in assets and excess reserves were zero. However, if the Fed continues to hold the IROR at 0.25%, the stock of currency can grow in a purely passive fashion to produce more inflation. That is, suppose that financial institutions perceive that the nominal returns from assets other than reserves are higher. When reserves become relatively less attractive, holding constant the total quantity of Fed liabilities, the composition of those liabilities must change, i.e. ultimately there must be less reserves and more currency. Part of the adjustment can occur through an increase in the price level. If the quantity of excess reserves were zero, the perception of higher nominal asset returns on the part of financial institutions would imply that the Fed would have to engage in open market purchases in order to maintain its fed funds rate target, and these open market purchases would be reflected in a larger stock of currency. Thus, the only difference between what happens with positive excess reserves and zero excess reserves is that, with positive excess reserves the overnight interest rate is fixed and the quantity of currency adjusts passively, and with zero excess reserves the quantity of currency is fixed and the overnight interest rate adjusts passively.

Thus, the stock of currency seems important for the determination of the price level, but what do we know about the demand for US currency? The first chart shows the ratio of currency (the currency component of M1) to nominal GDP, since 1947. 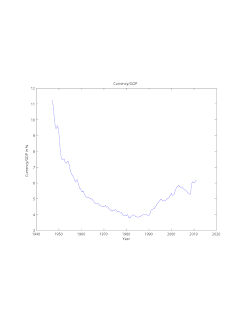 Now, in light of the popular view that the demise of currency is imminent, these numbers might be surprising. I wrote about this earlier here, in the days when looming deflation seemed to be the big worry. In the case of US currency, much is held overseas. How much? As a comparison, currency held in Canada is 3.4% of Canadian GDP, so possibly about half of the stock of US currency is held abroad. If that were the case, that still implies that the quantity of currency held within US borders is more than $1500 per US resident. That's a lot of cash, and a significant fraction (how much I have no idea) is being used in nefarious activities.

Thus, the stock of US currency outstanding is large, and it has become larger since the onset of the financial crisis. Yet due to the nature of currency, and the role of US currency as an international medium of exchange, we cannot quantify the demand for US currency, or forecast it. Further, under current circumstances the Fed does not directly control the quantity of currency in circulation, but can control it indirectly, through the IROR.

What has been happening to the stock of currency recently? 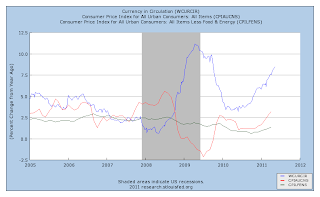 The next chart shows year-over-year percentage growth rates in currency (blue), the headline CPI (red), and core CPI (green). Year-over-year growth in currency has been increasing for the last year and now exceeds 8%.

Now, it is hard to see how the demand for US currency in the world is likely to increase further, in real terms. Whatever was driving the increase in currency demand in the financial crisis will likely reverse itself, so if US real GDP grows at 2-4% this year, and currency growth is at 8% per year and increasing, it seems the lower bound on the inflation rate in the near term is about 4%. Here, Ben Bernanke tells us:

FOMC participants see inflation remaining low; most project that overall inflation will be about 1-1/4 to 1-3/4 percent this year and in the range of 1 to 2 percent next year and in 2013. Private-sector forecasters generally also anticipate subdued inflation over the next few years.

Now, maybe FOMC participants know something about future tightening that they are not telling us, but this forecast seems well on the low side given the FOMC's stated goal of keeping the IROR at 0.25% for an "extended period."

Bernanke and company would like us to ignore the increase in headline inflation that we have seen, but money does not discriminate between goods and services that are in the "core" and those that are not. If money is growing at a rate that seems in excess of what is consistent with 2% inflation, and the demand for the stuff is not increasing in real terms, then headline inflation has to exceed 2%, and it's not going to be temporarily high if money growth is sustained at that level. It's not crazy to think that the Fed should be tightening in the fall, if not earlier.
Posted by Stephen Williamson at 12:45 PM