Paul Krugman seems worried that Noah Smith has been bitten by a zombie, or otherwise thrown into a discombobulated state. Noah's sin is to have suggested that what is going on in a New Keynesian model may not shed much light on what is going on in Japan. The basic Woodford framework confines attention to sticky prices as a friction that creates inefficiency that can be corrected by monetary policy. Monopolistically competitive firms can change prices infrequently - say, through a Calvo pricing mechanism - and unanticipated shocks can lead to relative price distortions that monetary policy can act to mitigate. But, those relative price distortions will disappear in the long run as prices adjust. Noah seems to think that 20 years (in the Japanese case) gets us pretty close to full adjustment, and I agree. Indeed, with the frequency of price changes we observe in the data (e.g. Klenow et al.), the same argument would seem to apply to our current predicament. It has been five years since the shock hit that produced the last recession in the United States. If we think that the current state of the US economy is somehow inefficient - i.e. there is some set of policies that could improve matters - it seems we should not be thinking about sticky prices as the source of that inefficiency.

But in another sense, Noah is incorrect:

This New Keynesian model corresponds nicely to the simple AD-AS model that people learn in Econ 102.

You can forgive Noah for thinking this, as a lot of effort on the part of Woodford (in his book and published papers) and other New Keynesians has has gone into making it appear that New Keynesian economics is somehow the same thing as AD-AS, or in fact an excuse for taking that shortcut. The basic New Keynesian model is actually a real business cycle model with Dixit-Stiglitz monopolistic competitors and sticky prices, which owes more to Ed Prescott than to Keynes. Without the word "Keynesian" attached to it, Keynes would not recognize the structure as having anything to do with him, and it's doubtful the first person who put an AD-AS model into an undergraduate textbook would recognize it either.

Krugman is certainly sold on the idea that AD-AS and Woodford macroeconomics are the same thing. According to Krugman, we can do really well with AD-AS, though sometimes we might have to "check" what we are doing by going to the full-blown New Keynesian model. In the case of Noah's post, Krugman thinks Noah's analysis is flawed because of his failure to take account of the liquidity trap, and otherwise falling short in adhering to Krugman's talking points.

Krugman has two models he likes to think about. One is AD-AS, and the other is in his paper with Eggertsson. But he wants to think of those as the same thing. So let's take the AD-AS route, as that's easier. What is Krugman trying to say? Set the wayback machine, Sherman, and off we go. I'm now imagining myself in a macro class in 1975, where I learned what was in the first edition of Branson's book. This is something like playing with an 8-track player you found in your basement. The thing works - in the sense that you can make it do what it was built to do - but you know while playing with it that you are wasting your time.

Figure 1 shows you the IS-LM, AD-AS part of the model. This is the liquidity trap case. The LM curve is flat. Equilibrium output Y0 is less than full employment output YF. Why is the AD curve vertical? That's because changes in prices don't do anything in the IS-LM portion of the diagram, as real money demand is perfectly elastic at the zero lower bound. So, in the absence of some kind of intervention, this economy remains stuck below full employment forever. The fix is fiscal policy - increase G, shift the IS curve, and we go to full employment output. 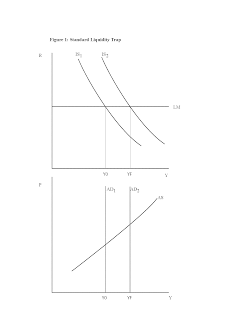 But, as I was taught in my intermediate macro class, Pigou had a fix for this. If there's a wealth effect on consumption, for example, then you get a downward-sloping AD curve, as in Figure 2. In the short run, output is less than full employment, but if we let prices adjust, then over time the nominal wage falls, shifting AS to the right, and we get full employment. But the short run fix, as in Figure 1, is fiscal policy, which gets us there faster without the bother of waiting for the price adjustment. 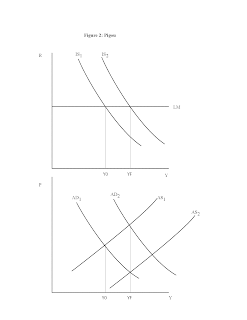 But Figures 1 and 2 are not what Krugman has in mind. He's barking up Kalecki's tree, apparently. Kalecki argued that a deflation would increase the real value of debts denominated in nominal terms, and that the wealth effect would go the other way. This gives you a positively-sloped AD curve, which Eggertsson and Krugman indeed coax out of their New Keynesian model.

The key question is, with the Kalecki effect in there, is the slope of the AD curve greater or less than the AS curve? Let's do it both ways. First in Figure 3, suppose AD is steeper than AS. In this case, long-run adjustment to full employment occurs through an increase in the nominal wage. This occurs because there is an excess demand for labor. But I don't remember Krugman arguing that the labor market is currently too tight (maybe you do?). He must be thinking about the other case. 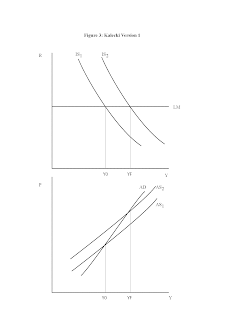 So, in Figure 4, AS is steeper than AD. In this case, in the long run we have to wait for the nominal wage to fall, shifting AS to the right. Krugman says that wages are really sticky downward, so we don't want to wait that long. What's the short-run cure? Well, the problem is that there is too much aggregate demand. We want to shift AD to the left. Austerity will work nicely. Again, I don't remember Krugman pushing for that, but maybe you do. 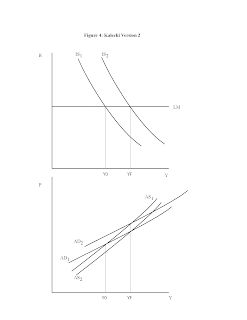 Krugman might want to appeal to Eggertsson/Krugman as the ultimate truth with respect to issues he discusses in his blog, but that paper has its own problems. It's a superficial treatment of debt contracts and default, and uses linearization to characterize the zero-lower-bound equilibrium, which is known to be misleading.

These are the basics of Krugman's narrative:

1. Most of the macroeconomics done since 1970 was a waste of time.
2. The exception to (1) is New Keynesian economics.
3. New Keynesian economics and textbook AD-AS are essentially the same thing.
4. Wages and prices are sticky.
5. Wage and price stickiness are the primary source of current inefficiencies in the U.S. economy.
6. Relative to what is efficient, GDP is currently too low, and the unemployment rate is too high.
7. We can correct the inefficiencies that currently exist with an expansion in government expenditure on goods and services.

That narrative is a web of contradictions, and hardly internally consistent science. The AD-AS model somehow persists in textbooks, which causes it to retain its power as a tool for communicating with people who have only a smattering of economics training. Krugman exploits that, and so have New Keynesians, but that behavior doesn't serve the cause of science.
Posted by Stephen Williamson at 10:00 AM