Finger on the Pulse?

Some journalists are able to get inside what is going on in a technical subject, and explain it well for lay people. But this post by Paul Krugman left me puzzled. He says:

At this point, however, there is wide acceptance of the idea that for a variety of reasons, but especially downward nominal wage rigidity, the Phillips curve is not vertical at low inflation.

What Krugman seems to mean is that, in the long run, there is a tradeoff between unemployment and inflation at low rates of inflation. The claim is that this is "widely accepted."

On the empirical front, let me reproduce two charts from my last post. First, let's look at a scatter plot of the pce inflation rate vs. the difference between the unemployment rate and the CBO natural rate of unemployment (quarterly, 1955-2013): 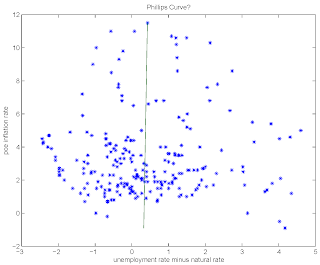 So at low rates of inflation, say below 2%, do you see this long-run tradeoff? I don't.

Next, look at what's been happening for the last 9 quarters: 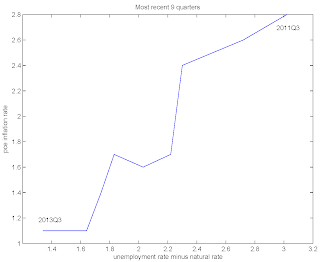