The other day I met an intelligent person from the Moon. Apparently this Moon Person (MP) knows nothing about what goes on here on earth, with the exception of: (i) Paul Volcker was the Fed Chair from August 1979 until August 1987; (ii) The Fed controls the nominal federal funds rate; (iii) Paul Volcker is well known for bringing down the rate of inflation in the United States.

I showed MP the following chart. 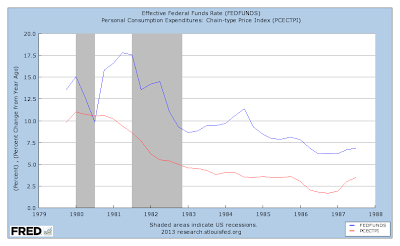 Me: So, how did Paul Volcker reduce inflation?
MP: Well, it looks like he did it by reducing the fed funds rate.
Me: But, look at how the fed funds rate goes up in 1980-81.
MP: Sure, but the big picture is that Volcker walked into the job with an inflation rate of 10% and a fed funds rate at 13.75%, and walked out the door with the inflation rate at about 3.5% and the fed funds rate at 7%.
Me: OK, fine. But, here's something else I want you to think about. There is a guy, Ben Bernanke, who was appointed Fed chair in February 2006, and will walk out the door in January, 2014. Now that we've warmed up on the Volcker era, here's a chart (not quite the Bernanke window, but I want to make this 32 quarters, just like Volcker) that shows you how things evolved during Bernanke's 8 years. 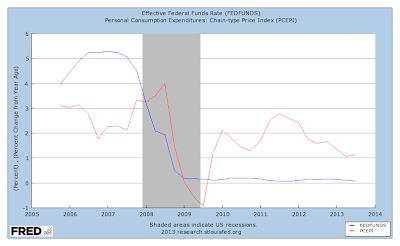 Me: So tell me, what's going on here?
MP: Well, there's some weird shit going on in that shaded area, but it looks like this guy tried to do the same thing as Volcker. He dropped the fed funds rate, and inflation fell from the time he came into office until he was about to leave. I notice as well that Bernanke increased the fed funds rate early in his tenure. Also, he doesn't seem to be as good an inflation fighter as Volcker. Bernanke reduced inflation from 3% to 1%, but he had to reduce the fed funds rate from 4% to close to zero to do it. When Volcker reduced the fed funds rate, he reduced the inflation rate about one-for-one, in terms of percentage points, but Bernanke gets a reduction of about 1/2 percentage point in the inflation rate per percentage point reduction in the fed funds rate. Must be something Bernanke was doing wrong. Is he a dimwit?
Me: First, watch your language. Second, Bernanke is no dimwit.
MP: Well, sure looks like it. Convince me.
Me: Long ago there was a man named Irving Fisher, who thought about how inflation and nominal interest rates are related. Roughly, the real interest rate - what people actually care about when they make economic decisions - is the nominal interest rate minus the inflation rate. If it were true that, over a long period of time, the real interest rate were unaffected by monetary policy, then a one percent decline in the nominal interest rate should result in a one percent decline in the inflation rate.
MP: Cool. That seems to be what happened with Volcker in that first picture you showed me. This Irving Fisher guy was no dimwit.
Me: Well he wasn't infallible. Fisher was also famous for giving the academic institution where he worked bad investment advice, and making that place poor.
MP: That's too bad.
Me: No, don't worry. They got rich again. But, we digress. Notice what happened with Bernanke. The difference between the fed funds rate and the inflation rate is what we could the "ex post real fed funds rate."
MP: And that declined during Bernanke's term by about 2%. Interesting. So what would make that happen? Maybe it has something to do with that weird crap and the shaded area.
Me: You catch on quickly. The shaded area is a recession. We've seen plenty of those. A recession is basically bad crap, but this particular recession involved weird crap as well. It's my understanding that the weird crap associated with the bad crap made the real interest rate go down.
MP: So, if the real interest rate went down, Irving Fisher would tell us that inflation wouldn't fall as much when Bernanke reduced the fed funds rate. So Bernanke's no dimwit. He's just a victim of bad crap and weird crap.
Me: Excellent, you're catching on. Another way to look at this is in the next couple of pictures. The first shows a scatter plot, with the dots connected to show you the path that the fed funds rate and inflation followed in the Volcker years, and in the Bernanke years. The second is the same scatter plot without connecting the dots. 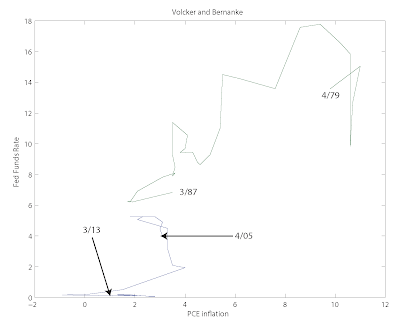 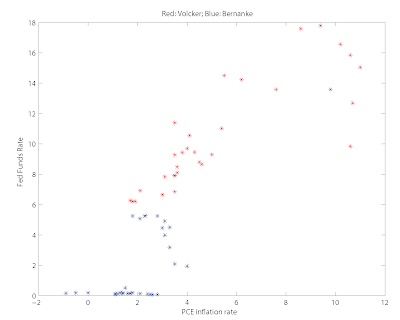 MP: Yes, I see. Irving Fisher's relationship shows up clearly in that plot. And if I fit a regression line to the Volcker points and the Bernanke points separately, the relationship shifts down in the Bernanke years. That's the decline in the real interest rate.
Me: They teach regression on the Moon?
MP: Yes. But, now I'm wondering. That shaded area in the second chart ends in early 2009, so I guess the bad crap is over. If the weird crap is over too, and weird crap makes the real interest rate low, why isn't the real interest rate back to normal?
Me: Well, first, it's not clear what normal is. Second, the weird crap is persistent - that's part of what makes it weird. But there are good reasons to think it's going away.
MP: Ah, I see. So if it's going away, and the fed funds rate stays at zero, then the inflation rate should be falling, just like Irving Fisher tells us. That seems to be what is happening in the second chart.
Me: Excellent. You are really quick.
MP: But, now I'm wondering, what's this inflation anyway? Is that some bad crap too?
Me: Yes. That's why Volcker wanted to get rid of it. Everyone agreed that the high inflation in 1979 was bad crap, and Volcker listened.
MP: So, it looks like Bernanke did a good thing. Less bad crap inflation.
Me: No, that's not the thinking. Bernanke and his henchpersons have agreed that 2% inflation is the best we can do. Less is bad crap. More is bad crap.
MP: I thought you were telling me this Bernanke character is not a dimwit. Looks like he just went from bad crap (3% inflation) to more bad crap (1% inflation).
Me: No, it's more complicated than that. For example, notice that Volcker had a bad crap period in 1981-82. We think that the bad crap shaded area in that case was caused by the attempt to reduce inflation.
MP: I see. So Volcker gave us some bad crap for a short time to give us good crap for a long time. Seems like a good idea. And it must work in reverse. If there is bad crap, we can make the bad crap less bad for a short time by lowering the fed funds rate.
Me: Yes, that's exactly the thinking.
MP: But lowering the fed funds rate and keeping it there for a long time means low inflation, and bad crap for a long time.
Me: Yes, that too.
MP: So, I think I know what Bernanke's successor should do. Who is that anyway?
Me: Janet Yellen.
MP: Good. On the Moon we let women run everything. Works much better. The men only play competitive sports, and dissipate their aggressive energy in harmless ways. Anyway, it looks as if Yellen should just increase the fed funds rate. For the time being, it won't have to go up much, so there should be little short-term bad crap to worry about. And you'll get the good crap permanently because the inflation rate will go back to 2%. But it seems like the typical thing to do (Volcker in reverse) if you want to increase inflation is to reduce the fed funds rate for a short time, and then increase it. So Yellen should do that.
Me: There's a problem with that. Financial markets won't let the fed funds rate go below zero. But there's something else that can be done. That's called quantitative easing, or QE.
MP: So what's that do?
Me: No one is quite sure. On Thursday evening, one of Bernanke's henchpersons, Jim Bullard, talked to us. He likened QE to a reduction in the fed funds rate.
MP: OK, so if we take Jim at his word, then some of that QE should be done. After that, the fed funds rate should go up.
Me: You're way ahead of the game. They already did that - the QE part. Actually, they've been doing it off and on for about five years, and now QE is going at full bore.
MP: That seems odd. If I think that reducing the fed funds rate gives some temporary relief from bad crap, or some short term good crap, why would they keep doing that? If, as Jim says, QE is just like a reduction in the fed funds rate, then if I keep doing it, that should just make inflation lower. So we get no more good crap, only a perpetuation of successively worse bad crap.
Me: You're good at this. Maybe someone should find you a job in the Federal Reserve System.
MP: Whatever. Anyway, it looks like the counterpart of reducing the fed funds rate temporarily has already been done. So, either Bernanke, or Yellen in her new term, should be increasing the fed funds rate. Get that show on the road.
Me: Well, there are no plans for doing that in the immediate future.
MP: Are those people d...
Me: Don't say it. Things are complicated.
MP: My head hurts. Let's go to the coffee shop.


Posted by Stephen Williamson at 11:01 AM