I have the distinction of having made Brad DeLong's Thursday idiot rollcall. For the uninitiated, here's what being labeled an idiot by Brad DeLong means. From DeLong's vantage point, the world looks like this: 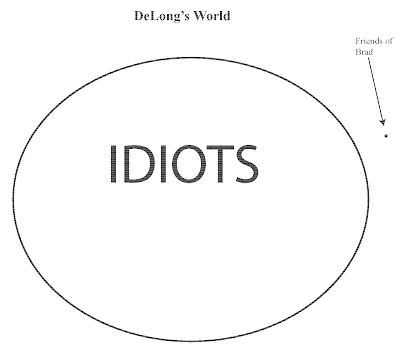 But we should see what Brad has on his mind. Maybe he has a point? Brad's complaint regards this post of mine, where I discuss a New York Times article on Narayana Kocherlakota. The latter part of the post used this quote from Ed Prescott as a launching point:

It is an established scientific fact that monetary policy has had virtually no effect on output and employment in the U.S. since the formation of the Fed.

But, the point I wanted to make is that what Prescott said is not obviously kooky. For example, if we take the statement apart and ask what it means, we have to ask what exactly "monetary policy" connotes. Does this mean the systematic element of policy, or are these the "surprises" in monetary policy? Prescott's statement says that, since 1913, monetary policy was unimportant for the time series of employment and output. Does that mean that monetary policy could not have an effect on real variables? Prescott's statement certainly does not say that the Fed cannot control inflation, or that inflation does not matter. So, there are a lot of things to consider. I thought this could be thought-provoking, and commenters had some interesting things to say. I certainly learned something.

So, this is what DeLong says about Prescott's statement:

Everyone else simply says: "Prescott is wrong: that's not an established scientific fact at all."

I guess the problem DeLong is having here is with the words "established," and "fact." Those words make the statement seem grandiose. But if we were to be charitable to Ed, we might say that by "established" he means "the best evidence we have tells us," and by "scientific fact" he means "the fact is that the science tells us the following." But this is semantics, and is not very illuminating. Here's what one of my commenters said:

There is a very clear and uncontrovesial interpretation of what Prescott was saying: Milton Friedman was wrong in that, if you do an analysis of variance of which shocks explain most of U.S. GDP and inflation fluctuations, monetary shocks will explain a tiny fraction of either. This is not a radical, out of mainstream view, it is in fact what comes out of SVAR studies and of DSGE estimation. If you want to see for yourself, open Smets and Wouter's AER and look for the table with the analysis of variance.

What this doesn't mean (and this is where Prescott was too vague and open to attack), is that monetary policy is impotent if a Central Banker decides to use it in an unexpected way, or that monetary policy rules don't matter, since they may affect how macroeconomic aggregates react to real shocks. But if you want to know the source of fluctuations, you are better off looking elsewhere.

I thought that was pretty good.

So, here's a blog post of Brad's from 2010 in which he approvingly quotes Narayana Kocherlakota, as follows:

Why do we have business cycles? Why do asset prices move around so much? At this stage, macroeconomics has little to offer by way of answer to these questions. The difficulty in macroeconomics is that virtually every variable is endogenous – but the macro-economy has to be hit by some kind of exogenously specified shocks if the endogenous variables are to move. The sources of disturbances in macroeconomic models are (to my taste) patently unrealistic. Perhaps most famously, most models in macroeconomics rely on some form of large quarterly movements in the technological frontier. Some have collective shocks to the marginal utility of leisure. Other models have large quarterly shocks to the depreciation rate in the capital stock (in order to generate high asset price volatilities). None of these disturbances seem compelling, to put it mildly. Macroeconomists use them only as convenient short-cuts to generate the requisite levels of volatility in endogenous variables...

So, it seems Brad is not being entirely consistent. Asking questions is important. Good scientists should not cut off discussion by calling people idiots when what they're saying appears not to be entirely orthodox.
Posted by Stephen Williamson at 12:18 PM