RBC and NK in a Nutshell

Paul Krugman is a very bad student. He doesn't pay attention in class, he refuses to read, and he complains constantly that he's not learning anything.

Take real business cycle theory – I know it’s a horse I beat a lot, but it’s not dead, and it’s a prime example within economics of what I have in mind. I still want to spend at least some time explaining that theory to my undergrads, so I’ve been looking for a simple, intuitive explanation by an RBC theorist of what’s going on. And I haven’t been able to find one!

Krugman could of course look in any of the standard undergrad macro texts, including my favorite. But I'll boil it down and make it really easy for him, and put RBC and NK (New Keynesian economics) in one picture. Full blown RBC, and basic NK (which is just RBC with stickiness) includes intertemporal choice, but for the basic ideas, static analysis works OK. 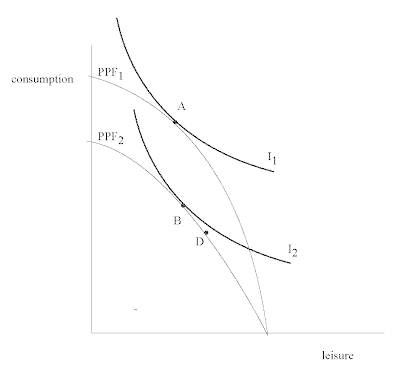 The picture shows production possibilities frontiers (PPFs) and the indifference curves of the representative agent. I've taken out government spending, as it's not part of the basic story for either RBC or NK, so production possibilities represents simply a technological tradeoff between consumption and leisure. All output is consumed, so consumption equals output. Initially, this economy is in equilibrium at point A. That's also a Pareto optimum as this economy is frictionless, for now. A negative TFP shock shifts the PPF in, and the equilibrium is at point B. The way I've shown it, leisure rises, hours of work fall, and consumption (equal to outuput) also falls. So it looks like a recession as we know it. One can also show that, for the model to work, the elasticity of labor supply with respect to the wage (minus the slope of the PPF at the equilibrium point) has to be sufficiently large - just disentangle the income and substitution effects, and it's clear that leisure could fall when TFP falls.

So that's RBC. What about NK? This is a cashless economy - as in a Woodford world - but we can imagine that prices are quoted in "dollars." P is the dollar price of goods, W is the dollar price of labor, and W/P is the real wage. Suppose further - much in the spirit of Woodford - that the central bank sets P. So, if the nominal wage is flexible, then a negative TFP shock gives us the same thing - the competitive equilibrium goes from A to B. But suppose the central bank does nothing in response to the TFP shock, and W is fixed. Then, after the TFP shock the equilibrium is at D, not B. At D, the real wage is the same as at A, i.e. the slope of the PPF is the same at D as at A. So in the NK world there is an inefficiency when the economy is hit with a shock, and we can see the welfare loss in the picture - the representative agent is on a lower indifference curve at D than at B.

What to do about the efficiency loss? In the NK world, the central bank could increase P, or the fiscal authority could subsidize hiring and pay for that with a lump sum tax. In either case, the appropriate policy will take us to B. Done.

So, that is a simple apparatus, that an intermediate-level undergrad can handle easily, and principles students can do it too. This can be a launching pad for ideas about what TFP is, what a TFP shock is, and what these basic stories leave out. Is it really very useful to think about TFP shocks driving business cycles if we can't measure aggregate TFP well? That NK story about monetary policy seems pretty crude. Shouldn't we elaborate more on what central banks actually do? Shouldn't we include financial factors in both the RBC and NK stories?

And for the really sophisticated stuff, boiled down into words with no mathematics, read Kartik's book.
Posted by Stephen Williamson at 8:24 AM