The Labor Market and the FOMC Meeting

The FOMC will meet today and tomorrow. Given that there has been little news that would change the economic forecast, the Fed is likely to continue "tapering" - the monthly reductions in the size of asset purchases that began in December. This meeting may be important though. First, this will be the first FOMC meeting chaired by Janet Yellen. Second, with the unemployment rate at 6.7% and falling on trend, the Fed's 6.5% threshold will soon be passed, so the FOMC will have to come up with a new framework for forward guidance.

In this Q&A with John Williams, President of the San Francisco Fed, he was asked about potential changes in forward guidance:

Q. You have advocated replacing the Fed’s current guidance on interest rates, which is linked to a specific unemployment rate, with a less specific description of objectives. Isn’t that necessarily a less effective kind of guidance?

A. Back in 2011 the qualitative guidance wasn’t strong enough and so we went to the data-based concrete guidance and I thought that whole period was very successful. We had a disconnect between our views of where the policy was going and what the market thought. We used some pretty strong language saying what our intentions were and that seemed to work pretty well. I think that was really helpful and in many ways successful. As we’ve gotten away from truly extraordinary times and we’re in a transition toward somewhat more normal times, then the argument for trying to put out this really strong signal about, ‘We’re not going to raise interest rates until we see this one thing happen or this other thing happen,’ I don’t think is the right approach because it puts way too much attention on one aspect of the data. My preference would be to see us moving to describing our policies in our statements much more consistently and clearly. Here are our objectives, here’s where we are relative to them, and given this progress that we’ve made, here’s the policy stance we’re taking and here’s how we’re going to adjust this going forward. If that’s more the approach we’re going to take it would be vaguer or more general than a number. But I think it would be more accurate.

This speech by Charles Plosser, President of the Philadelphia Fed, comes to much the same conclusion, though by a different route. Plosser says:

Economists have learned that expectations play an important role in determining economic outcomes. When businesses and households have a better understanding of how monetary policy is likely to evolve, they can make more informed spending and financial decisions. If policymakers can reduce uncertainty about the course of monetary policy, the economy is likely to perform more efficiently.

So, that seems like the kind of forward guidance that Williams wants now. But Plosser also says:

A somewhat different rationale or view of forward guidance is that it is a way of increasing accommodation when the policy rate is at or near the zero lower bound. Some models suggest that when you are at the zero lower bound, it can be desirable, or optimal, to indicate that future policy rates will be kept "lower for longer" than might otherwise be the case. Thus, policymakers may want to deliberately commit to deviating from what they would otherwise choose to do under normal conditions, such as following a Taylor-like rule. In these models, such a commitment would tend to raise inflation expectations and lower long-term nominal rates, thereby inducing households and businesses to spend more today.

That's the forward guidance for extraordinary times that Williams discussed. Plosser does not seem to think that was such a good idea:

The FOMC has not been clear about the purpose of its forward guidance. Is it purely a transparency device, or is it a way to commit to a more accommodative future policy stance to add more accommodation today? This lack of clarity makes it difficult to communicate the stance of policy and the conditionality of policy on the state of the economy.

So, Williams thinks that extraordinary forward guidance was a success, but apparently Plosser doesn't agree. He thinks that, in the private sector, people were confused - they couldn't figure out whether the Fed was speaking ordinary forward guidance or extraordinary forward guidance. Here's what I think is going on. Post-financial crisis, the Fed was under a lot of pressure to do something about the state of the labor market. At the zero lower bound, "doing something" meant doing something extraordinary, and one of the extraordinary policies the Fed adopted was a form of forward guidance. That policy received support from the academic work of Mike Woodford and coauthors. In New Keynesian (NK) models, forward guidance is a commitment to future policy actions that are not time-consistent - once the future arrives the central bank would choose a different policy action if it could. To provide stimulus at the zero lower bound, according to NK models, the central bank would need to commit to a future path for the nominal policy rate that would remain lower than it would otherwise be (given previous Fed behavior) for a longer period of time.

It could be that the Fed's motivation was wrong. Maybe NK models are a poor guide for monetary policy. But, suppose that we think NK models are the cat's meow. Then, for forward guidance to work, the FOMC would have had to clearly communicate: (i) what they were committed to; and (ii) that they were committed. The FOMC first announced that the policy rate would be low for an extended period; then, the policy rate was to be low at least until some calendar date; then that calendar date changed; then a threshold was announced in terms of the unemployment rate; then the FOMC started saying things about how the threshold didn't matter, and Fed officials began discussing other labor market indicators - the participation rate, the employment/population ratio - that might matter for its decisions. So, private sector individuals who care about these things would have a right to be confused about whether any commitment existed, and what the commitment was about. Thus, I'm very puzzled as to why Williams is calling the FOMC's extraordinary forward guidance experiment a success.

But, extraordinary forward guidance is now history, and hopefully we'll never revisit that experience. The FOMC is currently concerned with the nature of current and future ordinary forward guidance. If we want to make a prediction about the nature of what will show up in the FOMC statement on Wednesday, a good guess is that this will the "vague" guidance that Williams envisions. Plosser, who is on the other end of the spectrum from Williams, seems on board with that. In my opinion, vague language is exactly what is required. The FOMC should avoid making any commitments to numerical targets or thresholds for things it cannot control over the long run, and over which it may sometimes have little influence in the short run.

Here's something interesting in Williams's Q&A with the New York Times:

Some economists see evidence that inflation is tied to short-term unemployment. Right now we have a lot of long-term unemployment and a lot of people who have stopped looking for work. That suggests you could start to see wage and price pressures before the economy has returned to full employment.

So, let's explore that idea. This is what the recent time series of unemployment and vacancy rates looks like: 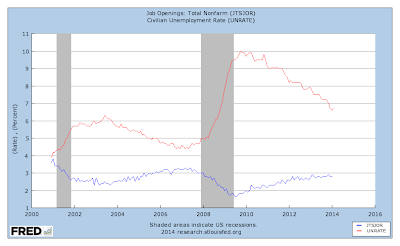 So, as the FOMC statement says, the unemployment rate remains elevated, relative to the sample in the chart, but the vacancy rate is back up to 2004 levels. If we look at this in the form of a Beveridge curve relation, with the points representing pre-recession observations, and the line connecting observations after that, the data looks like this: 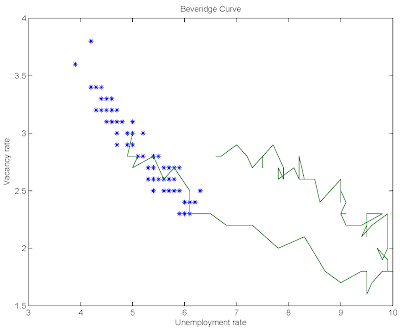 In the chart, you can see the shift to the right in the Beveridge curve, but the recent data is not as far off the pre-financial crisis relationship as it was.

But Williams is arguing that there are differences if we look at short vs. long-term unemployed. If we examine unemployment rates by duration of unemployment (number of unemployed divided by total labor force), the data looks like this: 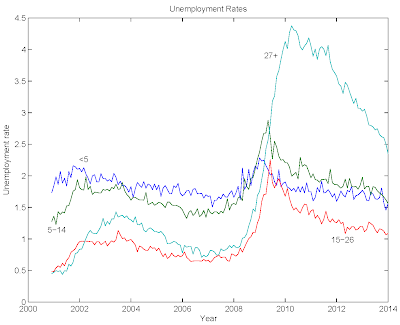 If we plot Beveridge curves by duration of unemployment, we see another version of the same story. For those unemployed less than 5 weeks, the most recent observation is well to the left of the pre-financial crisis cloud: 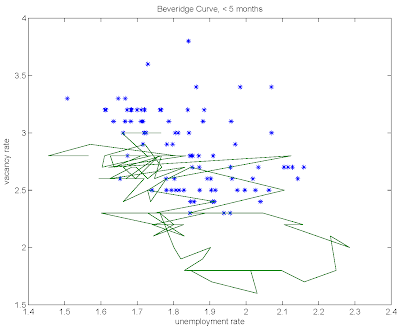 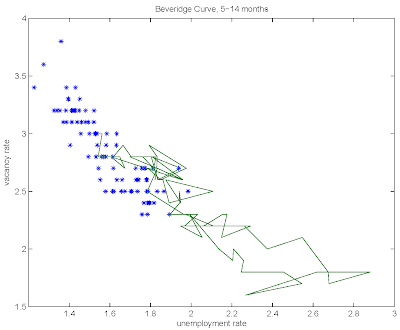 For 15-26 months you can observe the rightward shift in the relationship: 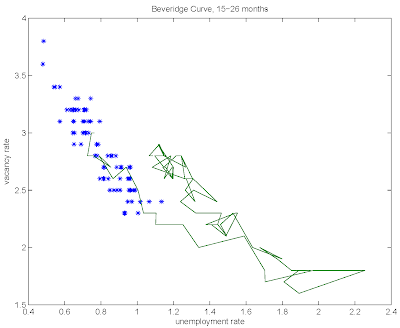 And this is even more pronounced for 27+ weeks unemployed: 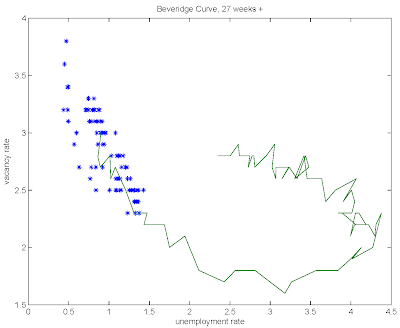 What about Phillips curves? At the aggregate level, using the same sample as for the Beveridge curves, except quarterly rather than monthly data, with inflation measured as the annualized quarterly percentage change in the PCE deflator: 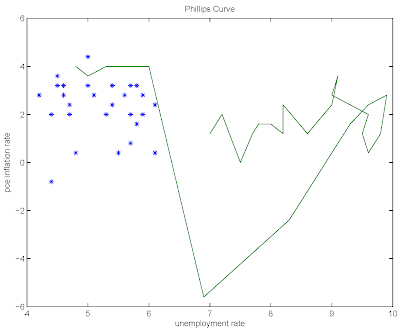 So, you may see a Phillips curve relation in that chart, but I don't - particularly in the recent data, where we have seen falling unemployment and a falling inflation rate.

But what if we disaggregate? Here's a Phillips curve for those unemployed less than five weeks: 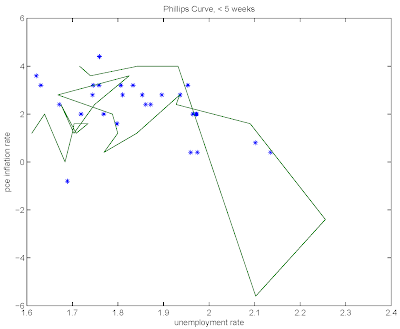 Maybe there's something going on there, but I wouldn't want to base a policy decision on what I see in that chart. Seems like the observed Phillips curve predicts about 3% inflation given the current unemployment rate, but we're seeing about 1%. So much for that. Here are the other Phillips curve relations - not much going on there either: 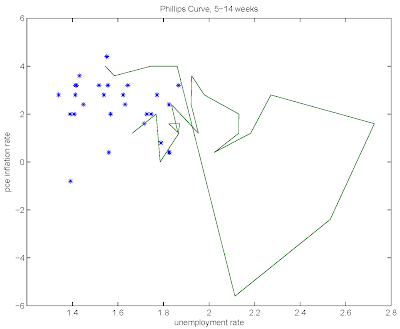 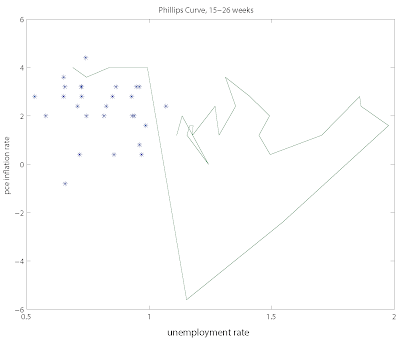 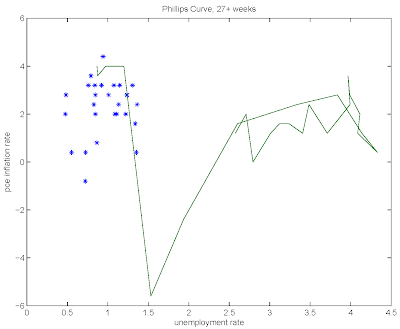 When Williams says that "some economists see evidence that inflation is tied to short-term unemployment," he may mean Robert Gordon. But I think Williams and Gordon should read this JEL paper by Mavroeidis, Plagborg-Møller, and Stock. The upshot of that work is that Phillips curve coefficient estimates are extremely sensitive to specification and changes in the data set. The conclusion that one should draw, I think, is that econometricians estimating Phillips curves are not estimating anything useful - the estimates cannot be taken seriously in a policy exercise.

As should be clear from Williams's Q&A, recent FOMC statements, and public statements by Fed officials, the Phillips curve is alive and well in policy circles. But the weight of the empirical evidence (also see my charts in this post) makes one wonder what some people on the FOMC could be thinking. The idea that some measure of slack in the economy can help explain inflation, or predict it, appears rather foolish.

In the past, however, the Phillips curve has been a convenient fiction, which allowed the FOMC cover to increase the overnight nominal interest rate target. A persistently low nominal interest rate target ultimately produces low inflation. That's a prediction common to a wide class of mainstream monetary models, and the Fisher relation is a strong empirical regularity. If the FOMC argues that a "tight" labor market predicts higher future inflation, and that the nominal interest rate should go up when the labor market is tight, that ultimately becomes self-fulfilling. But in our current circumstances, even if we're seeing "tightness" in terms of short-term unemployment, we're not going to see significantly higher inflation as long as the policy rate remains low.

Thus, it's possible that sentiments like Williams's could lead the Fed to do the right thing for the wrong reason. If the Fed wants higher inflation, the policy rate needs to rise, and this may happen if the idea catches hold with the FOMC that the labor market is tight. My guess, however, is that the idea won't actually take hold. But listen to what Janet Yellen says tomorrow. That should tell us a lot about where the committee is headed.
Posted by Stephen Williamson at 11:43 AM