Deflation in Sweden: Svensson's Advice is the Problem, Not the Solution

As Lars Svensson notes, Sweden now has inflation that ranks among the lowest in the world. From the Riksbank's website, CPI inflation in Sweden looks like this: 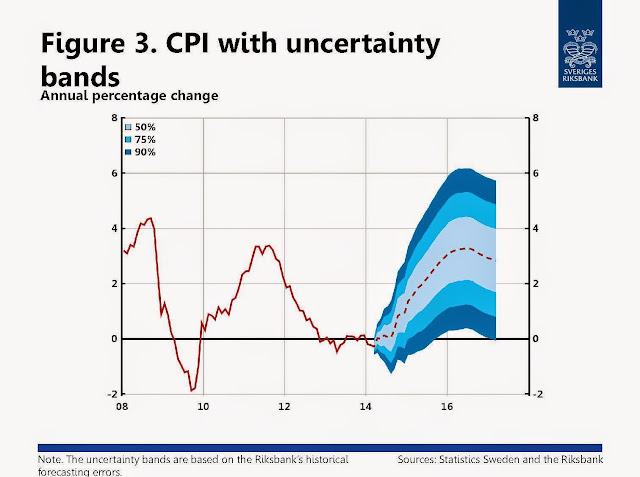 The Riksbank has a 2% inflation target, so clearly they are missing on the low side. Of course, given the typical wishful thinking of central bankers, you can see from the chart that they are forecasting that they will hit the target a year from now, and exceed it later in 2015 and 2016.

So, why is inflation so low in Sweden? Svensson claims:

The deflation has been caused by the Riksbank’s tight monetary policy since the summer of 2010.

In Sweden, the Riksbank's policy rate is the repo rate, which is set by the Executive Committee of the central bank, and has followed this path since 2008 (again, from the Riksbank's web site): 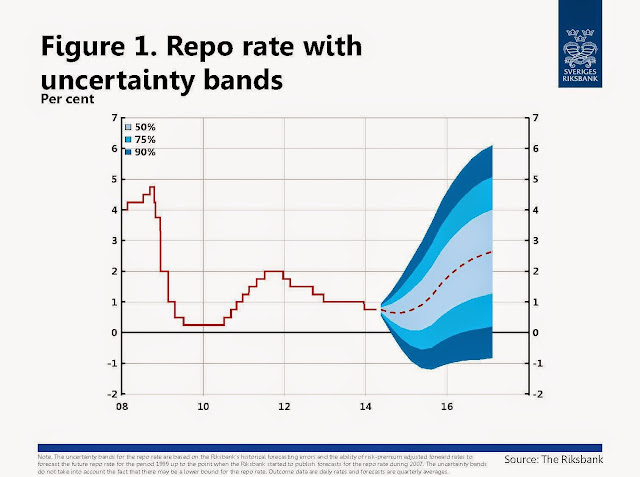 So, does the repo rate path in the last chart represent a policy that was too tight, i.e. was the policy rate too high? How could we answer that question? Svensson might think about policy in terms of a Taylor rule, so it might help to look at the performance of the real side of the economy in Sweden. Here are real GDP growth rates (from the Riksbank's web site again): 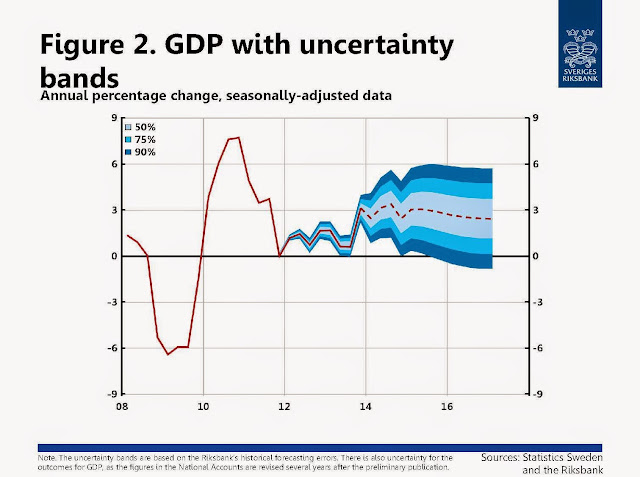 For good measure, we should look at the real GDP levels too: 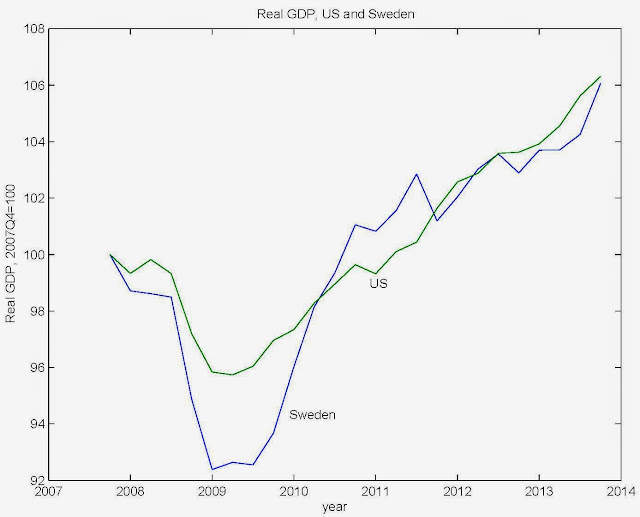 So, in the last two charts, you can see that the downturn in Sweden during the recession was larger, but the recovery was stronger than in the US, with Swedish real GDP returning to its pre-recession level earlier than in the U.S. But there has been lower growth in Sweden in 2012-13 so, relative to 2007Q4, the US and Sweden are in essentially the same place.

Monetary policy needs to remain highly expansionary to contribute to inflation rising towards the target. Although inflation has been somewhat lower than expected, only a minor revision has been made to the inflation forecast. The Executive Board of the Riksbank has therefore decided to hold the repo rate unchanged at 0.75 per cent. It is judged appropriate to begin gradually raising the repo rate in one year's time, when inflation has picked up.

As economic activity strengthens, inflationary pressures are expected to rise. However, it is uncertain how quickly inflation will rise, particularly as it has been weaker than expected for some time now. The repo-rate path has therefore been adjusted down somewhat and reflects a greater probability of a repo-rate cut in the near term compared with the assessment made in February.

That's from a section titled "Low Interest Rate Until Inflation Picks Up." Clearly, if inflation remains low, the policy rate will remain low.

So, it seems to me that the Riksbank has been, and is, playing pretty much by the Old-Keynesian/New Keynesian book. Why Svensson doesn't like what the Riksbank was and is doing is not apparent from the data. We need to dig deeper to find out why he's so critical. Svensson was a Deputy Governor of the Riksbank from May/2007 to May/2013. At a critical juncture in June 2010, the Executive Board of the Riksbank voted to increase the policy rate 1/4 point to 0.5%. Svensson dissented:

Deputy Governor Lars E.O. Svensson entered a reservation against the repo-rate path and advocated a repo-rate path with a repo rate of 0.25 per cent through the fourth quarter of 2010, and thereafter a gradual return to the repo-rate path of the main scenario. Lars E.O.Svensson maintained that such a repo-rate path results in a better outcome for both resource utilisation and inflation, with both lower unemployment and CPIF inflation closer to the target.

After leaving the Riksbank, in September 2013 Svensson wrote this post, in which he claims that, if the Riksbank had not only done what he had recommended in June 2010, but kept the policy rate at 0.25% until the current time, the inflation rate would be at the 2% target, and unemployment would be lower. In Svensson's September 2013 post, it is not clear to me what model he used to come up with his counterfactual, but suffice to say that, whatever the model is, it tells us that a short-term real interest rate of -1.75% can be sustained for 3 1/2 years, which seems goofy. One thing I would be interested in seeing is the output this model produces under the actual path for the policy rate. My guess is that it predicts inflation well above what actually occurred. Off the top of my head, I would say that, under Svensson's policy scenario, the inflation rate would currently be lower, and the unemployment rate would be about the same as what we're actually seeing in Sweden now.

Of course, this is just quibbling over history. What does Svensson think the Riksbank should do now if it wants to hit its 2% inflation target?

The most important thing is that the Riksbank takes the inflation target seriously and stops neglecting it. In order to get inflation back to target soon, the policy rate has to be lowered quickly to 0.25 percent or even zero. If this does not help, the Riksbank – as other central banks at the zero lower bound with too low inflation and too high unemployment – will have to use unconventional (but by now frequently tested) policy measures. These include a negative policy rate, large-scale asset purchase to lower long interest rates (quantitative easing), a low policy-rate path for a longer period with different variants of “forward guidance”, foreign-exchange interventions to depreciate the currency or at least (as in Switzerland) prevent it from becoming too strong, and to aim to overshoot the inflation target for a few years.

By now, it should be well known that Taylor rules have some very undesirable properties. In particular, a central bank which follows a Taylor rule blindly can get stuck in a policy trap, in which the policy rate is at the zero lower bound, and inflation is low or negative. The central bank wants higher inflation, and thinks it will achieve this by lowering the policy rate, which is not feasible, so the policy rate stays at the lower bound and - given that the Fisher relation holds in the long run - inflation stays low or negative. This is the policy trap that Svensson's advice would lead the Riksbank into. 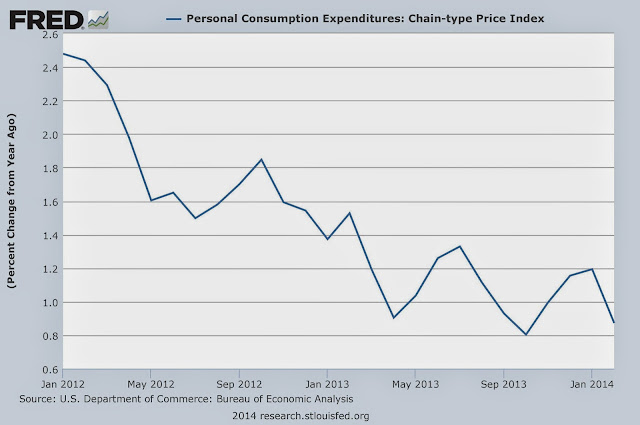 Another notable experiment is the Bank of Japan's "Quantitative and Qualitative Monetary Easing Program," which began in April 2013. Here's how that's going: 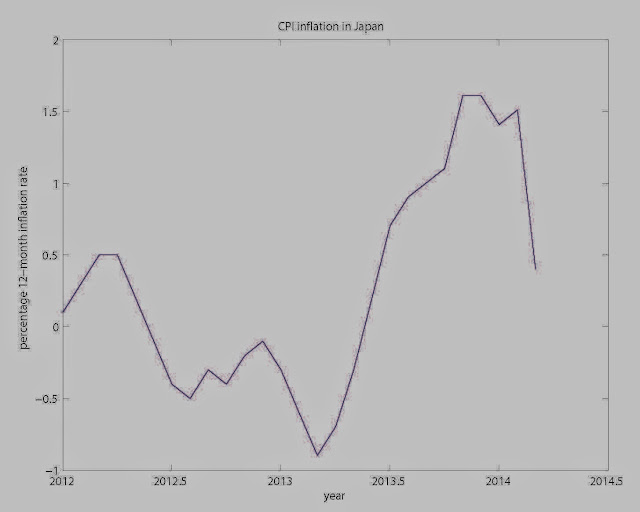 While there was a bit of a burst in inflation toward the end of 2013, the year-over-year inflation rate in Japan is now less than 1/2%.***

In addition to the standard Taylor-rule policy-trap problem, there are two elements of Svensson's unconventional policy recommendations that further exacerbate the problem, in terms of how Svensson looks at it. First, if QE works in the long run the way I've modeled it, then it will ultimately produce less inflation, not more, if the policy rate stays low or at the zero lower bound. Second, consider Svensson's "negative policy rate" recommendation. This appears to be a variant of the idea that, if our problem is a binding constraint on the nominal interest rate at zero, then we should relax the constraint by somehow taxing the liabilities of the central bank. Miles Kimball loves this idea. Basically, the central bank could tax reserve accounts, and there are schemes that might allow taxation of currency or its electronic replacement.

What would be the effect of taxing central bank liabilities? For simplicity, think about a world with perfect certainty. In the long run, standard asset pricing gives us the Fisher relation, which is

So, if we think that r is invariant to monetary policy in the long run, then if the central bank pegs the nominal interest rate at its lower bound, and central bank liabilities are taxed, this will make long-run inflation lower.

***Addendum: I made an error in the chart by including a March observation which was a preliminary estimate for something that was not in fact the national CPI. Here's the chart that (correctly) drops the last observation: 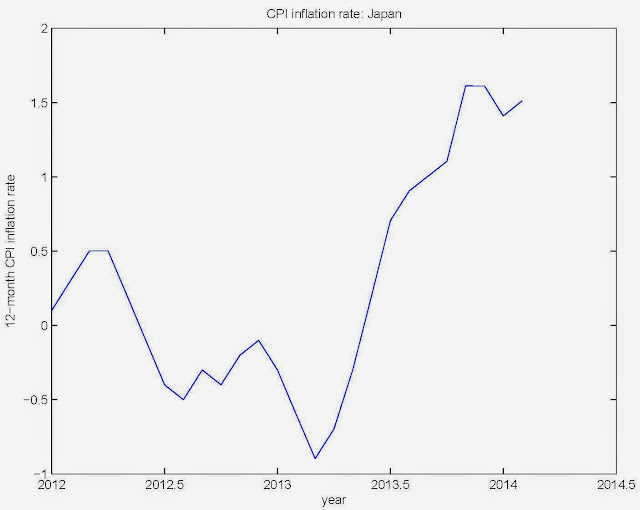 So that doesn't give the dramatic story I thought it did, i.e. year-over-year inflation is still up around 1.5%, though short of the Bank of Japan's 2% inflation target. Note as well, that if we look at the levels, in January the CPI fell, and there was no change in February. 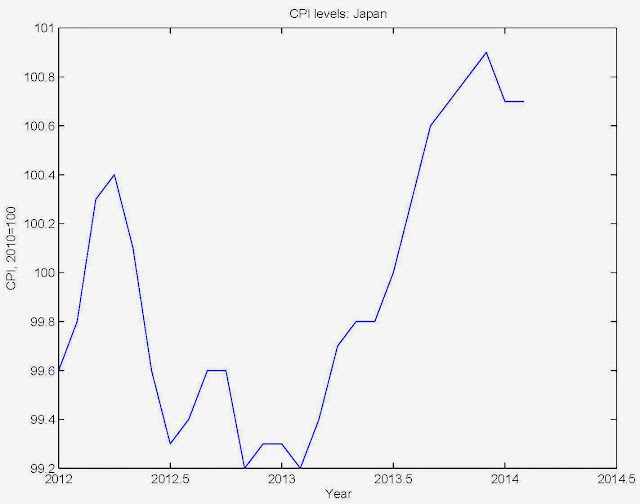 Further, if we take a longer view: 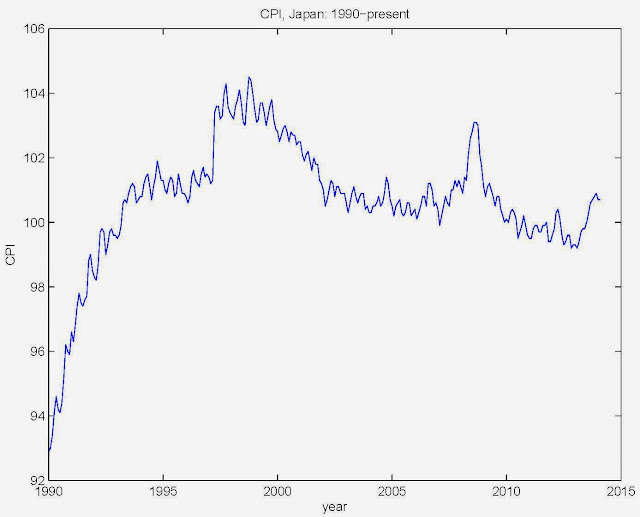 So, in spite of the recent blip in inflation, the average rate of inflation in Japan over the last twenty years is about zero, and in that 20-year period we have seen other short bursts of inflation. Thus, the Bank of Japan seems to have had some difficulty in producing inflation - but this time may be different. Given that the Bank seems intent on holding the short-term nominal interest rate at zero (essentially), I don't see it, but I'm curious to see how the data unfolds.

Posted by Stephen Williamson at 1:05 PM