The FRB/US Model and Inflation

The Board of Governors has posted details on the structure of the FRB/US model, the data used in estimating the model, published work using the model, etc. If you have access to EViews, it appears you can also run simulations. There is even a long disclaimer, presumably to cover cases where someone takes the model too seriously, uses it for retirement planning or some such, and then wants to sue the Fed. On this, I have a proposal, which is a blanket disclaimer to cover everything - public speaking by Fed employees, casual chit-chat in the coffee shop, whatever:

Please don't ever pay close attention to what we say, or take any action based on such utterances. We're only joking most of the time anyway. If you really think we're saying something important, you're not as smart as you look.

That should do it, I think. The Fed can state this once, and then never say it again.

The FRB/US model, used by the Board for forecasting and policy analysis, is the culmination of perhaps 45 years of work. Various generations of management at the Board have directed some smart people to work on this thing, and you can feel the weight of the large quantity of quality-adjusted hours of work that went into putting it together. But is it any good? Could the Board do just as well or better at forecasting with a much simpler tool? Could a well-educated and well-informed economist do a respectable job of central banking without ever looking at the output of the FRB/US model?

Long ago in a galaxy far far away, large-scale macroeconometric models were taken very seriously. This 1959 paper by Adelman and Adelman was published in Econometrica. They simulated the Klein Goldberger model on an IBM 650, which was the first mass-produced computer. Here's what that looked like (from Wikipedia): 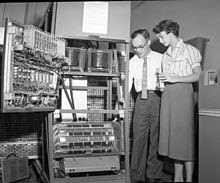 The Klein-Goldberger model was small relative to the FRB/US model - 15 equations. It was first estimated in 1955 using electro-mechanical desk calculators. In those days running a regression was a big job - you will understand the magnitude of the task if you have ever had to invert a matrix by hand. By the late 1960s, the Klein-Goldberger model had evolved into the large-scale FRB/MIT/Penn model, which is a distant ancestor of the FRB/US model.

But shortly after large-scale models had been warmly embraced by policymakers in central banks and governments, they were trashed by the upstarts of the macroeconomics profession. I think the modern notion of the Lucas critique is that it calls into question "reduced-form" economics, "implicit theorizing," and such. But Lucas's paper actually had a more narrow focus. Lucas was criticizing large scale macroeconometric models. This is the key quote from his paper:

The thesis of this essay is that it is the econometric tradition, or more precisely, the "theory of economic policy" based on this tradition, which is in need of major revision. More particularly, I shall argue that the features which lead to success in short-term forecasting are unrelated to quantitative policy evaluation, that the major econometric models are (well) designed to perform the former task only, and that simulations using these models can, in principle, provide no useful information as to the actual consequences of alternative economic policies. These contentions will be based not on deviations between estimated and "true" structure prior to a policy change but on the deviations between the prior "true" structure and the "true" structure prevailing afterwards.

Clearly, this was not taken to heart at the Board, as the FRB/US model - in spite of some claims to the contrary - does not look so different from early macroeconometric models. Indeed, if Klein and Goldberger were alive, I don't they would find the FRB/US model an unfamiliar object, though the documentation is dressed up in the language of modern macroeconomics as practiced in most central banks. So, was Lucas wrong, or what?

There's a lot going on the the FRB/US model, but suppose we focus on something the Fed cares about, and is instructed to care about: the inflation rate. Inflation determination appears to be in a New Keynesian spirit. So, one thing that has changed from 1970s-era large scale macroeconometric models is that the money demand function has disappeared, and monetary quantities appear to be nonexistent. Inflation is determined - roughly - by an output gap and trend inflation, which is a survey measure of the ten-year-ahead inflation rate. For example, if a shock occurs in the model which causes a positive output gap, then inflation rises, and over time inflation will revert to the long run trend, which is exogenous.

So, this is purely Phillips-curve inflation determination, which certainly does not square with how I think about the inflation process. Neither does it square with the data, which is notoriously at odds with the view that output gaps are important in explaining or forecasting inflation, or the view that Phillips curves are stable. The Phillips curve does particularly badly over the past couple of years or so. Here is the output gap measure used in the FRB/US model: 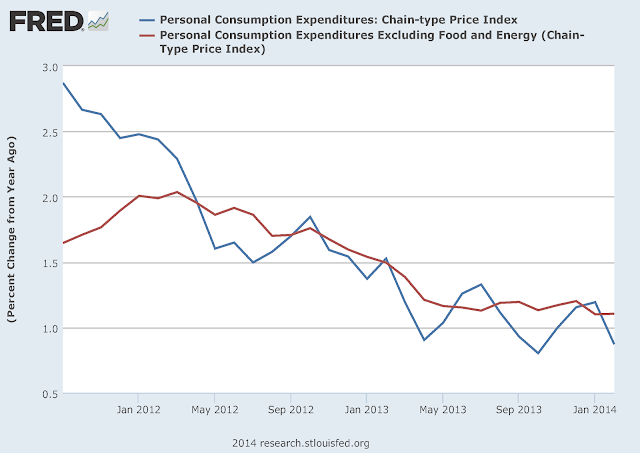 If you look at Flint Brayton's memo on "A New FRB/US Price-Wage Sector," in the FRB/US documentation, you can get some idea of how the Board staff think about this. Staff members of course monitor how the model is predicting out of sample, but the model had not been doing well:

Inflation in the recent recession and its aftermath did not decline nearly as much as the 1985-2007 estimates would have predicted, a result that is common to many models of inflation.

So, apparently they found that the Phillips curve they had estimated was not stable - during the recession it was making inflation forecasting errors on the low side. The solution was to re-estimate:

ML estimation over a longer sample period that ends in 2012 reduces the sector’s unemployment slope coefficient by more than half.

ML is maximum likelihood. So, if the sample is extended to 2012, the Phillips curve starts to go away - the slope coefficient gets much smaller. But the Board staff doesn't seem to like this:

An alternative and more cautious re-assessment of the unemployment slope is obtained with Bayesian methods. Using the 1985-2007 ML parameter estimates and their standard errors as a prior, Bayesian estimation over the longer sample reduces the slope coefficient by one-third.

So, apparently being "cautious" is when you ignore the data and go with your intuition.

This is important, as it tells us something about how the Governors and the FOMC chair think about monetary policy decisions. The FRB/US model seems to be producing the Board's forecast and some policy scenarios that are used as input at FOMC meetings. And we know that Janet Yellen takes FRB/US quite seriously. The FOMC is predicting that the inflation rate will rise over time to 2%, and Janet Yellen has told us that she thinks that, under that scenario, the Fed's policy interest rate should start rising in spring 2015. Some people want to interpret that as a hawkish statement, but I don't think so, because I think the forecast - and FRB/US - is wrong. The FOMC has also stated that the policy rate will stay low if inflation continues to be low or falls, and I think that is the likely outcome, for reasons I have discussed before. So, given what the FOMC has told us about its policy rule, my prediction is that the policy rate will be where it is for considerably longer than Janet Yellen thinks it will.
Posted by Stephen Williamson at 12:44 PM