Here's a common view of how the Fed implemented monetary policy prior to the financial crisis. 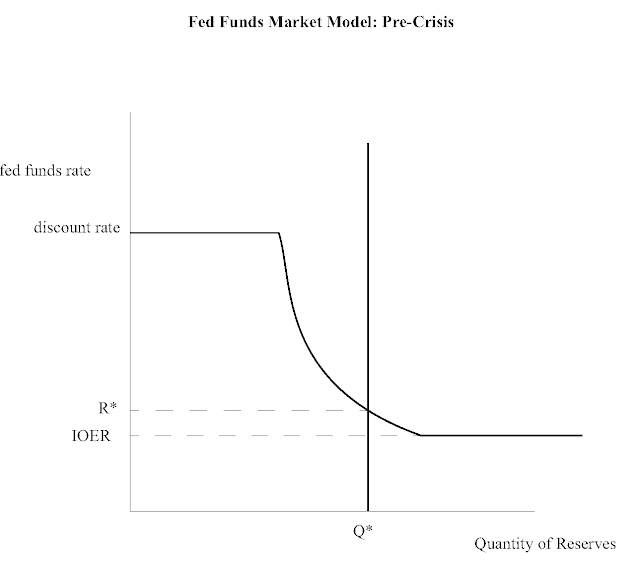 The chart shows a typical framework, pre-financial crisis, that was used in hitting a particular fed funds rate target, depicted by R* in the figure. The downward-sloping curve is a demand curve for reserves, which essentially captures a short-run liquidity effect. The larger the quantity of reserves in the system overnight, the lower the fed funds rate. But, a key problem for policy implementation was that this demand curve was highly unstable, shifting due to unanticipated shocks to the financial system, and with anticipated shocks related to the day of the week, month of the year, etc. Operationally, the way the Fed approached the problem of hitting the target R* was, effectively, to estimate the demand curve each day, and then intervene so as to assure that Q* reserves were in the market, implying that the market would clear at R*, if the demand curve estimate were correct. Note in the figure that the fed funds rate was bounded above by the discount rate (no depository institution, or DI, would borrow from another institution at more than the Fed was offering) and by the interest rate on reserves, IOER (no DI would lend to another DI at less than what the Fed was offering). Prior to the financial crisis, the IOER was zero.

There were certainly other approaches the Fed could have taken to implementing policy during the pre-crisis period. For example, since the Fed was typically intervening by varying its quantity of lending in the overnight repo market, an alternative approach might have been to follow a fixed-rate, full-allotment procedure, i.e. fix the repo rate, and lend whatever quantity the market wanted to take at that rate. That would work very nicely if the overnight repo rate and the fed funds rate were identical, but they are not. Typically, overnight interest rates move together, but there can be a substantial amount of variability in the margin between the repo rate and the fed funds rate, for various reasons. For example, fed funds lending is unsecured while repos are secured; lending one day and settlement the next day happen at different times in the two markets, etc. So, given that the directive from the FOMC was in terms of a fed funds target, pegging the repo rate need not be the best way to carry out the directive. One could make an argument that targeting a secured overnight rate makes more sense than targeting the fed funds rate, but that would have required revamping the whole structure of FOMC decision making.

Before the Fed was permitted to pay interest on reserves, people speculated (see for example, see this paper by Marvin Goodfriend) that the IOER would establish a floor for the fed funds rate. Indeed, as Goodfriend pointed out, with sufficient reserves in the system, the IOER should determine the fed funds rate. Essentially this is what happened in Canada from spring 2009 until mid-2010, when the Bank of Canada operated with a floor system and an overnight rate (equal to the interest rate on reserves) of 0.25%. But, since the Fed began paying interest on reserves in late 2008, the effective fed funds rate has traded below the IOER, which as been at 0.25%. 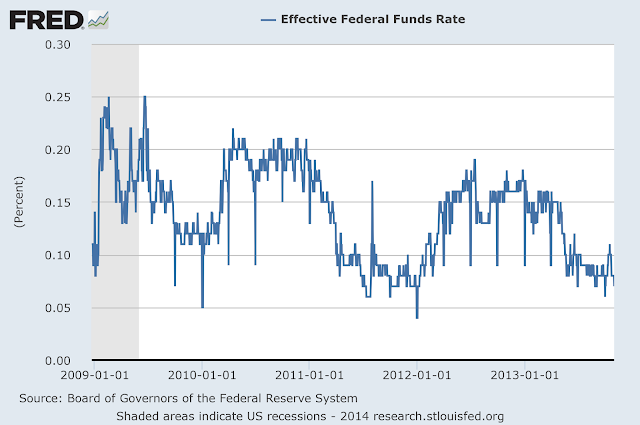 The margin between the IOER on the fed funds rate has been substantial - sometimes as much as 20 basis points.

In a previous post I discussed some details of Fed proposals to modify its approach to financial market intervention. Since then, the FOMC has made its plans for "normalization" explicit in this press release from September 17. Normalization refers to the period after liftoff - the point in time at which the FOMC decides to increase its policy rate. Basically, the FOMC will continue to articulate policy in terms of the fed funds rate, and proposes to control the fed funds rate through two means: the IOER, and an overnight repurchase agreement (ON RRP) facility. As explained in my previous post, ON RRPs are overnight loans to the Fed from an expanded list of counterparties. ON RRPs do not "drain" reserves, as they are effectively reserves by another name. Reserve accounts are held by only some financial institutions in the United States, and not all financial institutions with reserve accounts (the GSEs - government-sponsored enterprises) can earn interest on reserves. Thus, ON RRPs expand the market for Fed liabilities, and allow more institutions to receive interest on overnight balances held with the Fed.

The Fed's plans for modifying policy implementation will actually matter little for the how monetary policy works. Whatever the means, the basic idea is to use monetary policy to influence short-term nominal interest rates by targeting an overnight interest rate, just as was the case before the financial crisis. The key issue in the implementation appears to be how the ON RRP facility should be managed. What should the ON RRP rate be? Should there be quantity caps on ON RRPs? If there are caps, how large should they be? A smaller difference between the IOER and the ON RRP rate potentially tightens the bounds on the fed funds rate. However, the majority of fed funds market activity currently consists of activity to (imperfectly) arbitrage the difference between the interest rate that GSEs can earn on reserve balances (zero) and the IOER. That arbitrage activity should disappear if the IOER/ON RRP rate margin decreases sufficiently, in which case the effective fed funds rate could actually increase above the IOER. As well, the smaller the IOER/ON RRP rate spread, the larger the quantity of ON RRPs relative to reserves on the liabilities side of the Fed's balance sheet. This distributes Fed liabilities differently in the financial system, in ways that we perhaps do not understand well, and with unclear implications.

How long after liftoff will the Fed's altered financial market intervention persist? This depends on how long it takes for the Fed's balance sheet to "normalize." In this case, normality means a balance sheet for which currency accounts for most of the Fed's liabilities, as was the case prior to the financial crisis. Currently, total Fed liabilities are about $4.5 trillion, of which $1.3 trillion is currency and $3.2 trillion consists of other liabilities, including reserves and ON RRPs. Currency as a fraction of total Fed liabilities can increase through two means: (i) assets disappear from the Fed's balance sheet; (ii) the demand for currency goes up. Assets can disappear from the Fed's balance sheet because they mature or are sold. The FOMC Policy Normalization Principles and Plans state no plans for selling assets - either Treasury securities or mortgage-backed securities. The plans specify that reinvestment in assets will continue until after liftoff, i.e. currently the size of the Fed's asset portfolio is being held constant in nominal terms. Therefore, there are currently no plans to reduce the quantity of assets on the Fed's balance sheet until after liftoff. Thus, for now, reductions in the quantity of non-currency liabilities will happen only as the stock of currency grows.

So, how long will it take until the Fed is in a position to conduct policy exactly as before the financial crisis? If the Fed continued its reinvestment program, and if currency grew at 5% per year, it would take more than 25 years for Fed liabilities to consist of currency alone. An end to reinvestment could mean that normalization could happen in 10 years or less, barring circumstances in which the Fed chooses to embark on new quantitative easing programs. Thus, in any case, and under current announced plans by the FOMC, the current regime - a type of floor-on-the-floor monetary regime - should be with us for some time.
Posted by Stephen Williamson at 3:04 PM