Knut Was a Neo-Fisherian

In the midst of this Paul Krugman post, I found a description of Wicksellian dynamics:

As I’ve been trying to point out – and as others, notably Ben Bernanke, have also tried to point out – such monetary wisdom as we possess starts with Knut Wicksell’s concept of the natural interest rate. Try to keep rates too low, and inflation accelerates; try to keep them too high, and inflation decelerates and heads toward deflation.

So, I was thinking, what happens if we write that down and work it out?

To keep it simple, we'll just deal with a deterministic world. It's more or less New Keynesian, but a little different. To start, we have the standard Euler equation, which prices a one-period nominal bond - after taking logs and linearizing:

where R(t) is the nominal interest rate, r* is the subjective discount rate, a is the coefficient of relative risk aversion (assumed constant), g(t+1) is the growth rate in consumption between period t and period t+1, and i(t+1) is the inflation rate, between period t and period t+1. Similarly, the real interest rate is given by

Assume there is no investment, and all output is consumed.

To capture Krugman's concept of Wicksellian inflation dynamics, first let r* + ag* denote the Wicksellian natural rate of interest, where g* is the economy's long-run growth rate. Krugman says that inflation goes up when the the real interest rate is low relative to the natural rate, and inflation goes down when the opposite holds. So, write this as a linear relationship,

which is basically a Phillips curve - given anticipated inflation, inflation is high if the growth rate of output is high.

So this is easy now, as to determine an equilibrium we just need to solve the difference equation (5) for the sequence of inflation rates, given some path for R(t), or some policy rule for R(t), determined by the central bank.

That's just the long-run Fisher relation - the inflation rate is the nominal interest rate minus the natural real rate of interest. But what about other equilibria? If 0 < b < 1, or b > 2, then in fact the steady state given by (6) is the only equilibrium. If 1 < b < 2 then there are many equilibria which all converge to the steady state. 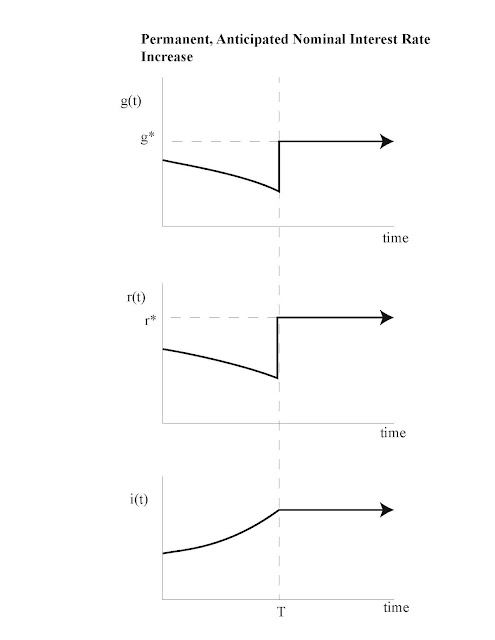 I'm not endorsing this model - just showing you its implications. And those implications certainly don't conform to "try to keep rates too low, and inflation accelerates; try to keep them too high, and inflation decelerates and heads toward deflation," as Krugman says. The Wicksellian process is built into the model, just as Krugman describes it, but the model has neo-Fisherian properties.
Posted by Stephen Williamson at 3:29 PM