Reading Paul Krugman's recent blog post reminded me of this earlier post of his, which was much in the same spirit. Krugman wants to argue that the Old Keynesians - James Tobin in particular - had it right. This is Krugman's conclusion:

So how does the decade of the 1980s end up being perceived as a defeat for Keynesians? To see it that way you have to systematically misrepresent both what happened to the economy and what people like Tobin were saying at the time. In reality, Tobinesque economics looks very good in the light of events.

So what exactly was "Tobinesque economics?" Krugman points us to Tobin's 1980 Brookings paper. Early in that paper, Tobin tells us about his view of the inflationary process - how we got where we did in the 1970s:

...when the authorities have chosen policies supportive of continued inflationary growth of MV, they have not done so from ignorance of arithmetic, indifference to inflation, or, in my opinion, political pressure. They have done so, rightly or wrongly, mainly because of the perceived consequences of nonaccommodation on the real performance of the economy. The inertia of inflation in the face of nonaccommodative policies is the big issue.

Tobin's view was that there was substantial inertia in inflation, and that it was very costly to bring it down - a widely-held view at the time. But there were other ideas at the time as I discussed here. Tom Sargent, in particular, was emphasizing the policy relevance of modern macroeconomics for disinflation. According to Sargent, central bank commitment was important, and we could reduce the inertia in inflation if we had a credible commitment from the central bank to reduce it.

The picture that Krugman shows us from Tobin's paper is this one: 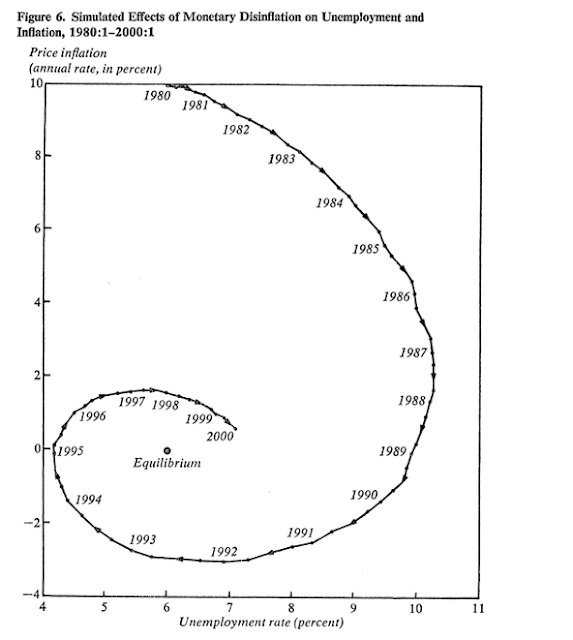 Krugman says that kinda sorta looks like what actually happened. I suppose a cat looks like a horse, because it has four legs. If you read Tobin's paper, he's using that figure to illustrate how bad he thinks disinflation through monetary measures could be. Look at it! After 7 years of monetary disinflation, the unemployment rate peaks at more than 10%, and it takes more than 12 years to get back to what Tobin thinks is the natural rate of unemployment, 6%. Tobin is using what he thinks is a conventional macroeconometric model. It's got adaptive expectations and a Phillips curve with what people then would have called a "high sacrifice ratio." You have to suffer a lot of unemployment to get a small reduction in inflation. Of course, Tobin's simulation looks nothing like what happened.

In Tobin's paper, after he shows us his simulation, he goes through some arguments about other factors that may not be in his model. Then, his punchline is this:

For these reasons,I think it would be recklessly imprudent to lock the economy into a monetary disinflation without auxiliary incomes policies. The purpose of these policies would be to engineer directly a deceleration of wages and prices consistent with the gradual slowdown of dollar spending. Macroeconomic policy and wage-price guideposts or controls would be concerted. Instead of issuing a monetary threat to everyone in general and to no one in particular, the government would seek the consent and cooperation of organized labor and business in a five-to-ten-year program to eliminate inflation at minimal cost in employment, production, and investment. The most promising incomes policy is to use tax-based incentives for complying with a sequence of gradually declining guideposts.

Tobin's telling us that it would be silly to disinflate through monetary policy alone. We need wage and price controls! So, how the 1980s was a victory for "Tobinesque economics," I have no idea. The Fed did what Tobin said they should not do, inflation did not have the inertia Tobin said it would have, and wage and price controls were thrown out with the policy trash. Further, the language of modern central banking is all about inflation targeting, commitment, and looking into the future. Tobinesque economics can only look good if you're not looking.
Posted by Stephen Williamson at 9:34 AM