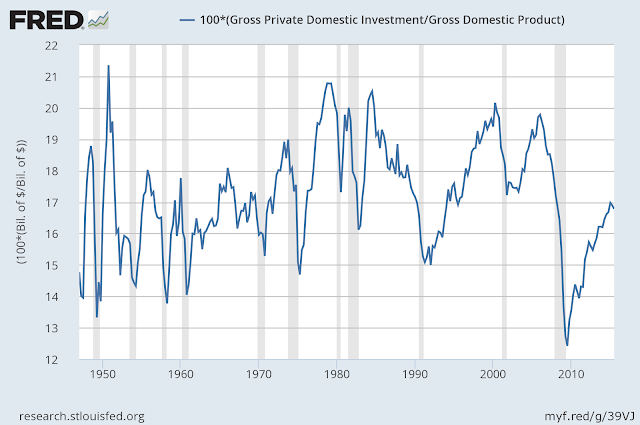 So, investment is not booming, but the current investment rate, at 16.8%, is only slightly below the sample average (post-1947) of 17.2%, and the post-1980 average of 17.5%. Further, the investment measure in the chart includes residential investment, and maybe we think there are a set of special factors that apply to housing, for the issue at hand. So, if we do the calculation (again ratios of nominal expenditure components) for gross private nonresidential investment to GDP, we get 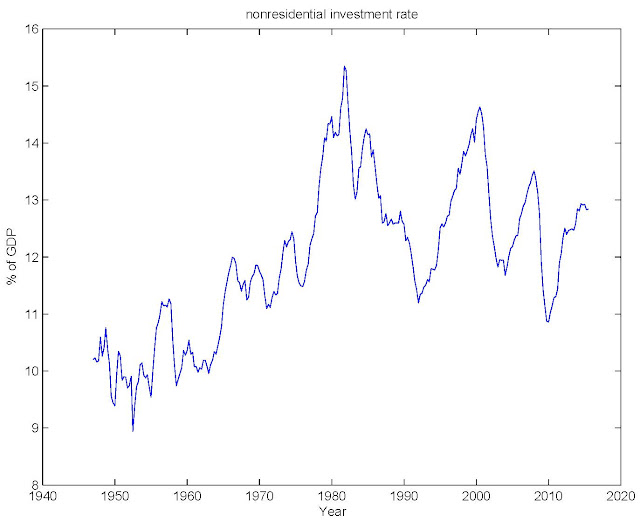 Again, that's not booming, but the current nonresidential investment rate is about at the post-1980 average, and is higher than the sample average of 12%.

So, my story is essentially the same, and is consistent with Rachel and Smith's measurements (though not with their story). The current investment rate is about at the post-1980 average, even if you include residential investment, but the real rate of return on capital is not low. So, we don't want to use a savings glut/secular stagnation story to explain why the real rate of return on government debt is low.

Addendum: Now I'm not sure this is better. But, apparently (I don't have references, but I have heard this said), the relative price of capital goods has fallen over time. So, wouldn't I want to use ratios of real investment to real GDP to measure the investment rate? Maybe chain weighting messes with that measure, but why is it any worse than the ones above, that don't account for the relative price change?
Posted by Stephen Williamson at 8:37 AM