In case you haven't noticed, Narayana Kocherlakota has been writing blog posts since arriving at the University of Rochester. I'm interested mainly in the most recent of these, in which Narayana attempts to make the case that monetary policy in the United States is currently "overly tight."

Narayana does not provide us with a definition of what "tight" might mean in a monetary policy context, but we can infer from what he has written that "too tight" means some combination of a fed funds target range that is too high, a balance sheet that is too small, and forward guidance that is insufficiently "accommodative." According to Narayana, tightening began on May 22, 2013, when Ben Bernanke announced his future intentions to Congress, and continued with the phasing out of the last QE program in late 2014, and the increase in the fed funds target range by 25 basis points in December of last year. Of course, the FOMC does not collectively think that policy is tight, and took great pains in the December 2015 statement to make that clear. In particular,

...the Committee decided to raise the target range for the federal funds rate to 1/4 to 1/2 percent. The stance of monetary policy remains accommodative after this increase, thereby supporting further improvement in labor market conditions and a return to 2 percent inflation.

The Committee is maintaining its existing policy of reinvesting principal payments from its holdings of agency debt and agency mortgage-backed securities in agency mortgage-backed securities and of rolling over maturing Treasury securities at auction, and it anticipates doing so until normalization of the level of the federal funds rate is well under way. This policy, by keeping the Committee's holdings of longer-term securities at sizable levels, should help maintain accommodative financial conditions.

By conventional measures, it seems hard to objectively make the case that monetary policy is tight. For example, if we fit a Taylor rule, including the pce inflation rate and the deviation of the unemployment rate from the CBO's natural rate, to the 1987-2007 data, and project out-of-sample from 2008 on, here's what we get: 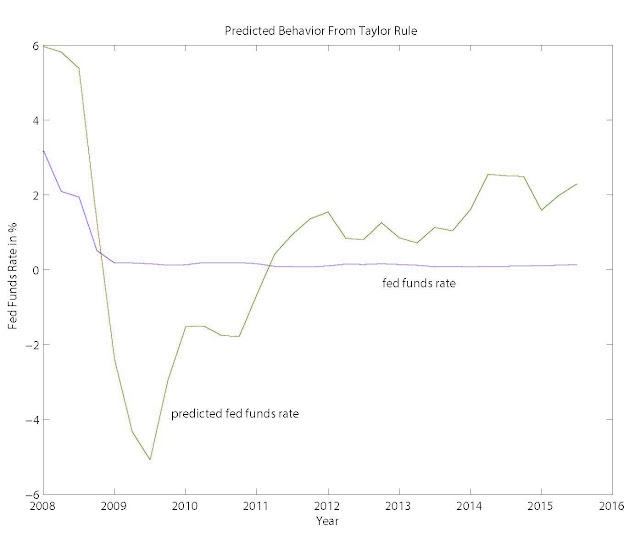 So, if the Fed had behaved as it did from 1987-2007, liftoff would have occurred early in 2011, and the fed funds rate would currently be above 2%. Further, QE was never used before the Great Recession in the United States, nor did the Fed engage in explicit forward guidance, to the extent it now does. If we believe that QE is accommodative, and that forward guidance matters, then the Fed's large balance sheet and its stated future plans imply that Fed policy is unusually accommodative, on top of an interest rate policy that is already unusually accommodative relative to past behavior.

So, in order to make the case that Fed policy is "overly tight," we would have to argue that there is something unusual going on that would warrant a different policy rule now, given the state of the world. Narayana claims there are "two persistent adverse effects" of "overly tight" policy. The first, according to him, is a loss in Fed credibility - people will come to expect that the Fed will undershoot its 2% inflation target. The second "persistent adverse effect" is a low employment/population ratio.

Let's explore the first "persistent adverse effect." What do we know about the effects of monetary policy on inflation? In a previous post, Narayana links to a paper of his, in which he lays out his view of the world. The key working parts of Narayana's model are equations (1) and (2) on pages 4 and 5. This looks somewhat like a conventional reduced-form New Keynesian (NK) model. The first equation prices a one-period nominal bond - that's typically called an "IS curve" in the NK literature. The second is basically a Phillips curve, which posits a relationship between the inflation rate - one period in advance - and the current "marginal utility gap." That's a little different from conventional NK due to the dating of the variables, and the fact that the equation isn't derived from pricing behavior.

To get some idea how Narayana's model works, let's consider a deterministic verison, and I'll use my own notation. Here's the pricing equation for a nominal bond (i.e. the "IS curve"):

Beta is the discount factor, u(c) is the utility function, and the other variables are defined as follows:

The parameter restrictions will stop inflation from blowing up, or the price level going to zero.

Note that the Phillips curve tradeoff is permanent here, as it is in Narayana's paper. He assumes that the long run marginal utility of consumption is exogenous. But equation (1) will tie down long-run inflation to the nominal interest rate - the economy is Fisherian in the long run. We can substitute for the marginal utility of consumption in equation (1) using (2), and obtain a difference equation for the gross inflation rate:

On the second "persistent adverse effect," Narayana thinks that monetary policy has contributed to the low employment/population ratio in the United States. As I pointed out in a post I wrote in August, by any conventional measure the U.S. labor market is tight, and nothing has changed much from August, except that the unemployment rate is lower. The rate of employment growth is high, the job openings rate is very high, and the unemployment rate is low. The labor force participation rate has fallen substantially since before the recession, but there is nothing to indicate that this is anything other than a long-run phenomenon. As such, there's no indication that this represents an inefficiency that monetary policy can correct. Narayana may know something we don't. If so, he should let us know.
Posted by Stephen Williamson at 5:51 PM