What's Going on with Inflation?

Last week's numbers on the January pce deflator seemed to have sparked optimism in some people, though my non-macro friends are wondering why anyone is excited about more inflation. Here are what the 12-month inflation rates look like for the raw pce deflator and pce deflator excluding food and energy: 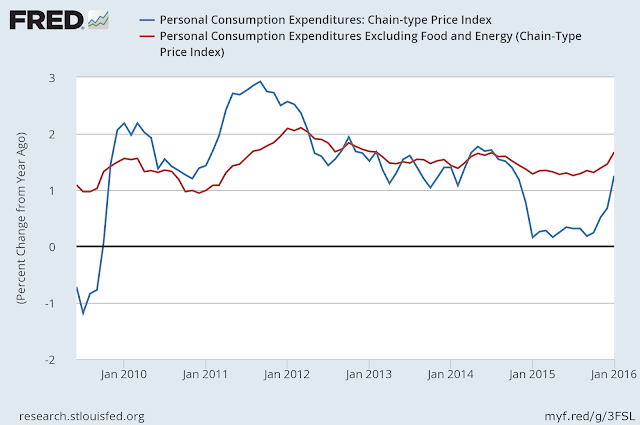 The FOMC most recently stated its inflation goals in this document. In particular,

...inflation at the rate of 2 percent, as measured by the annual change in the price index for personal consumption expenditures, is most consistent over the longer run with the Federal Reserve’s statutory mandate. The Committee would be concerned if inflation were running persistently above or below this objective.

That concern is reflected in the last FOMC statement:

In light of the current shortfall of inflation from 2 percent, the Committee will carefully monitor actual and expected progress toward its inflation goal.

So, apparently, inflation (according to the FOMC's chosen measure, the raw pce deflator) is moving toward the 2% goal, and for those who care about core inflation measures, the same thing is happening.

But what if we measure inflation in different ways, just to check. The next chart shows average inflation, for both the raw pce and core pce, calculated over the last month, the last two months, etc. That is, "months" on the horizontal axis is the number of previous months over which we're calculating the average inflation rate: 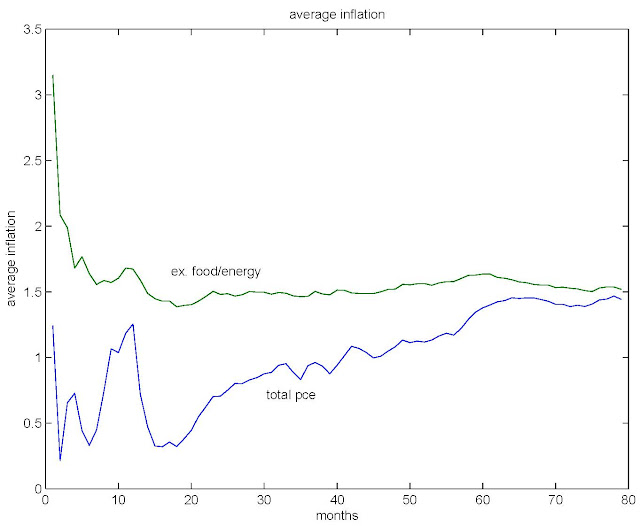 This chart tells us that the increases in core inflation have been concentrated in the last six months. For raw pce inflation, the story is mixed. Inflation is actually at its highest, at about 1.3%, when we look at the standard measure, which is a 12-month average. But over the last six months, average inflation is 0.3%, and over the last two years, it is 0.7%. So maybe we want to take the first chart with a grain of salt.

Next, let's look at the components - here we'll look at the CPI components, as that's more convenient. The large price increases in the recent data are coming mainly from non-energy services: 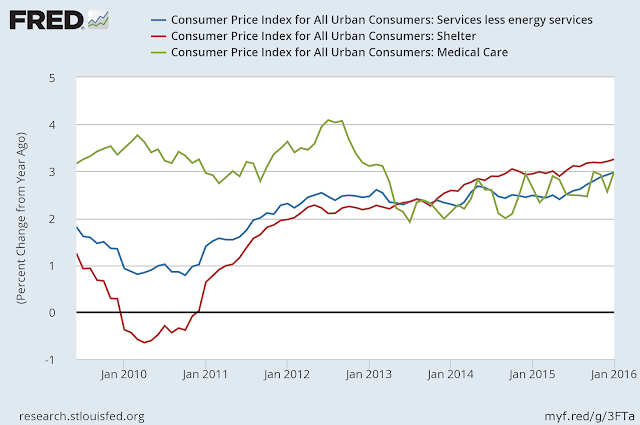 That chart shows total non-energy services, and the two largest components, shelter and medical care. Basically, the trend increase in non-energy services is dominated by shelter, which has a weight of about 32% in the total CPI, and about 15% in the raw pce deflator. Inflation in the price of shelter has been increasing and currently runs in excess of 3%.

Shelter prices are a bit unusual in the way they are measured and incorporated in the CPI, and in the pce deflator. In particular, in the CPI about 2/3 of the weight in the shelter price is accounted for by imputed rent of ownership housing. The idea is that, implicitly, you rent your house from yourself, and the price of the services you are receiving is measured as the rent that you would pay to a landlord for a similar dwelling in the rental market. In terms of the distortions that might be caused by inflation, this seems odd as, for the most part, there are no transactions associated with most of the existing housing stock - only a small fraction of the stock turns over in a given year. Further, what is being counted in these price indexes is some shadow price of a non-market service. If we're going to count imputed rent on ownership housing in our inflation measure, why don't we count imputed rent on my refrigerator, the shadow price of the dishwashing services I'm supplying, etc? Go figure. 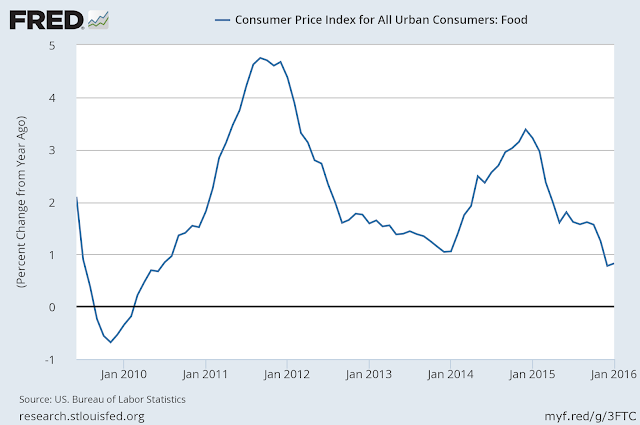 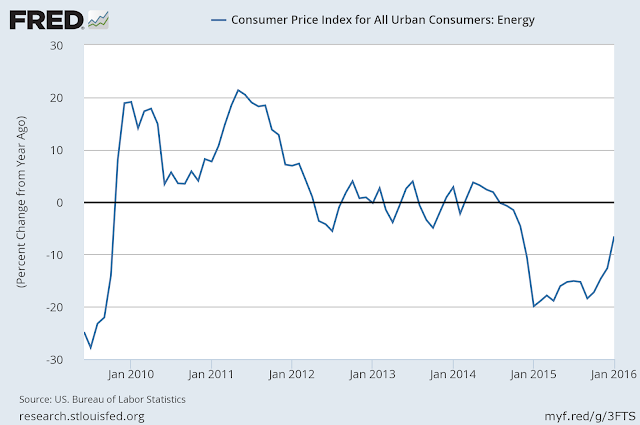 So, food inflation and energy price inflation are at their lowest in the last 5 years. Thus, the core inflation measure is stripping out the prices that are at rates below (for food) and much below (for energy) the average. "Core" measures have been with us since the 1970s, and strip out food and energy prices, as these prices have been historically volatile. You can certainly see that in the last chart, though in the previous one you can see that the variability in food prices has been much smaller recently than for energy. Core inflation measures adjust in a crude fashion for the fact that a large increase or decrease in food or energy prices typically reflects a temporary increase or decrease in relative prices. Possibly monetary policy should not respond to such shocks. But there are at least four reasons why a policy focus on core measures of inflation may not be a good idea:

1. Surely policymakers are smart enough to make judgments about which movements in inflation are due to temporary non-monetary factors, and which are not.
2. Large movements in the relative prices of food and energy can be highly persistent.
3. People might be tempted to think that, if food and energy prices had behaved in different ways, that core prices would have behaved in the same way they actually did. That can't be true.
4. Stripping out food and energy means putting even more weight on the price of shelter, which we know doesn't reflect actual transactions prices, for the most part.

To expand on the third point, if energy prices had not fallen dramatically, then holding constant nominal incomes (possibly not a great assumption, but what the heck), consumers would have had less to spend on other goods and services, and those other prices would be lower than they actually are.

So, what's going to happen to prices in the future? So far we're not yet seeing any turnaround in the raw pce inflation measure - as we showed above the increase in 12-month inflation is just a quirk in the data. But since the price of crude oil has started to increase again, if the prices of services continue to increase at 3% or more, we will indeed see raw pce inflation start approaching 2%. But that's just it. There's no good reason to think that, if energy price inflation increases, other components of inflation won't decrease.
Posted by Stephen Williamson at 6:21 PM