John Cochrane's blog post, Whither Inflation, is excellent reading. Basically, John takes a mainstream New Keynesian model and shows how it has Neo-Fisherian characteristics - if the central bank raises the nominal interest rate, inflation increases. Noah Smith seems to find this interesting, but he's got some problems with it. I'm going to attempt to answer his questions.

What about the Volcker disinflation, when Fed interest rate hikes were followed by disinflation?

Volcker was Fed Chair from August 1979 to August 1987. During that period the time series for the fed funds rate and the pce (year-over-year) headline inflation rate looks like this: 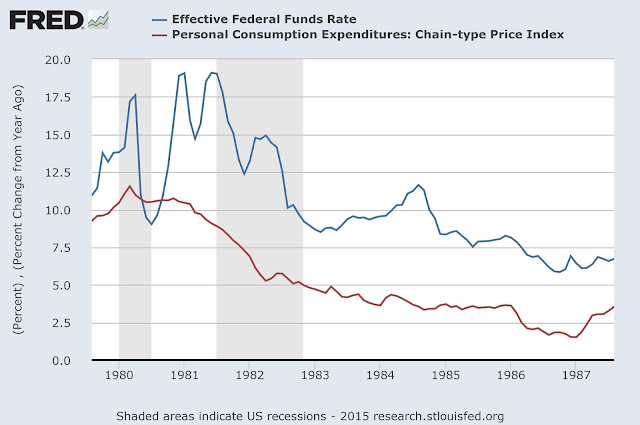 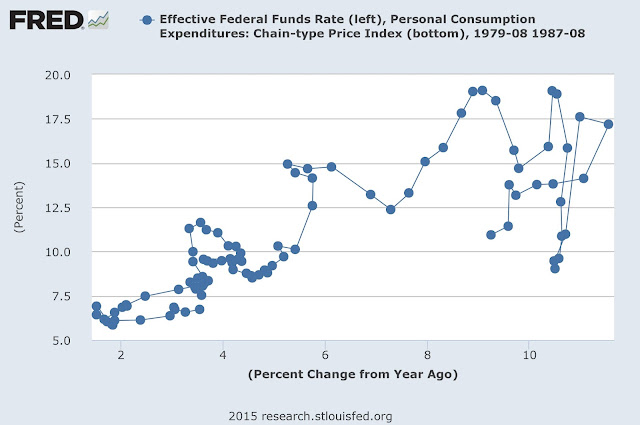 In that chart, inflation and the fed funds rate more often than not are moving in the same direction. Volcker didn't do Cochrane's experiment in reverse - the fed funds rate comes down gradually during the disinflationary period - but I don't see an inconsistency between what we see in the above 2 charts and what is coming out of Cochrane's experiments with the NK model.

Typically, in analyzing monetary policy, we want to study the operating characteristics of particular policy rules. That is, we specify the feasible set of actions a central bank can take under particular contingencies, specify a policy rule as a mapping from states of the world to actions by the central bank, and then ask how the economy functions under that rule. Cochrane's clearly interested in that, but he wants to show you a simple policy experiment so you can understand what's going on: Suppose the central bank increases the policy rate at a given point in time, permanently. What happens? This can help build your intuition so that you can handle the more difficult exercise of working out the optimal policy rule.

But the last reason we should be a little wary of the Neo-Fisherian idea is that it goes against our basic partial-equilibrium Marshallian idea of supply and demand.

For Noah, what's going on in the NK model is not intuitive. What does he mean? We can start by consulting an online dictionary:

Intuition: the ability to understand something immediately, without the need for conscious reasoning.

That fits closely with how an economist thinks about intuition. Over time, we accumulate knowledge of economic theory - models, basically - by working with them. For a lay person, partial equilibrium Marshallian supply and demand is not intuition. He or she has no clue about supply and demand. Sometimes Marshallian intuition works - for economists. I see a piece of economics that is unfamiliar, but I can recognize elements of supply and demand in it, and then I get the idea. But Cochrane is dealing with an issue that is dynamic, it's general equilibrium, it involves how the economic agents in the model think about the future. Why would I expect that static Marshallian intution would work? And if it doesn't seem to work, why should that make me "wary" of the idea? Looks like I have the wrong intuition, and I have some learning to do.

Here's some intuition. See if this works for you. Roughly, we can separate the short-term nominal interest rate into three components at any point in time:

In the short run, L moves in the same direction as R. That's the non-neutrality of money in the sticky price NK model. Consumption declines on impact, and then grows over time, at a declining rate. If you have taken a PhD macro course (or even some undergrad macro courses ) you should have some modern macro intuition. That intuition tells you how consumption smoothing relates to asset pricing. In this instance, with the representative consumer facing growing consumption, the real interest rate will be higher than it would otherwise be (the liquidity effect) because the representative consumer would like to smooth consumption over time (by borrowing against the future), but cannot. But consumption growth is falling over time, so the liquidity effect (the increase in L) declines over time. This implies that, with R constant, the Fisher effect (the increase in F) must rise over time.

So, we have the liquidity effect - the increase in L - initially positive and converging over time to zero, and the Fisher effect - the increase in F - rising over time and converging to the increase in R. But what is the Fisher effect on impact? I think the intuition of some people would tell them this impact effect should be negative. That intuition might come from thinking about Phillips curves. Maybe this Phillips curve intuition exists because people are ignoring the empirical evidence. Maybe people have some familiarity with reduced form NK models. Typically, in those formulations - essentially what Cochrane has written down - Cochrane's equation (2) is a "Phillips curve." So, you could forgive people for using their Phillips curve intuition in an attempt to understand what is going on the standard NK model. But, as it turns out, their intuition doesn't help them in this case.

It's not clear why anyone would expect the impact effect of the increase in R on F to be negative, if he or she understands what is going on in the model. And, indeed, Cochrane shows us an example in which the impact effect on F is positive, though there are other equilibria in which the impact on F is negative - in those other equilibria, the liquidity effect has to initially be that much stronger.

What would happen in models where we actually include money? An example in which there are short-run nonneutralities - liquidity effects - is the class of segmented markets models. In these models, the first round effects of monetary policy affect only a segment of the population - those closely-connected to financial markets. Then, an open market operation affects people asymmetrically. One very simple model of this type is Alvarez, Lucas, and Weber (AER, 2000). In that model, there are two types of people, traders and non-traders. When an open market purchase by the central bank occurs, the traders receive a cash injection, which is a temporary increase in their wealth, so traders then consume more. This induces a liquidity effect, as it is the consumption of traders that determines the price of nominal bonds in this economy. Consumption is temporarily high for traders, so L is temporarily low, and this reduces R.

So, that's reassuring. Cochrane's results hold in a widely-used macro model, and they hold in other monetary models with liquidity effects. So, for people who know how those models work, the results should be intuitive.
Posted by Stephen Williamson at 11:57 AM