Canada on the Fourth of July

I know this is a strange topic for July 4th, but here goes anyway. Given the recent G8 and G20 meetings, Canada is on our minds somewhat more than is usually the case (and even then, maybe not so much), so I thought I would take the opportunity to review recent events there.

On this July 4th, Canada is looking like the country that does everything right. Canadians are in one sense intrinsically modest (though of course we can think of many counter-examples, including my coauthor from Winnipeg), but they also tend to think of the country south of the border as populated by gun-toting lunatics who treat their disadvantaged badly - a place one would rather not be. But how has Canada been doing? First, let's look at the recent path of real GDP relative to the United States. 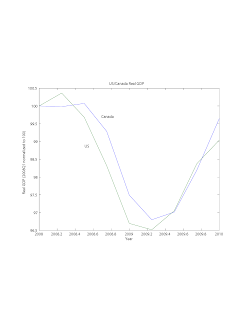 What you see here, in the first chart, is that the recent recession was not so different in Canada relative to the US, but the turning point in real GDP came later in Canada, the recession was not quite as deep, and the rebound has been faster. Labor (or labour, for Canucks) market behavior (behaviour) has been quite different however, as we see in the second chart. 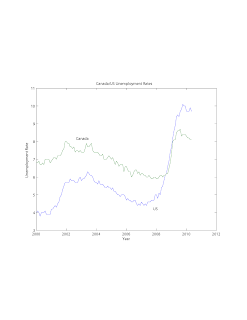 Behavior in the housing market has also been dramatically different from US experience, as shown in the third chart which depicts housing starts in the two countries. 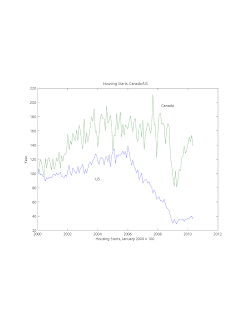 While the US has experienced a long decline in housing starts since 2006, with the current level of starts at about 40% of what it was in 2000, Canadian housing starts have rebounded from a short-lived drop in the recession to a level 40% higher than in 2000.

In terms of the state of government finances, Canada stands out among highly-developed economies. In the last chart, we show the total government surplus as a percentage of GDP in the US and Canada. 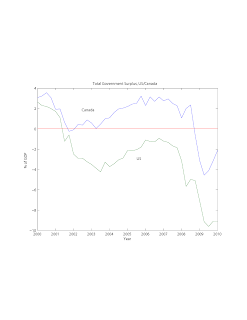 Here, note that the Canadians ran surpluses until the recent recession, with the current deficit standing at about 2% of GDP. Of course we all know about recent US experience.

Now, Canada does not seem to be consistent with any of the narrative threads I am familiar with in the United States. If the Tea Party people were correct, a country with generous social insurance, including government-provided health care, should not be doing well, and certainly should not be capable of being fiscally responsible. If the Krugmaniacs were correct, Canada should not be bouncing back from the recession with such a low unemployment rate without a much more heavy dose of Keynesian stabilization policy.

The experience of Canada and the US demonstrates how government matters. When a financial system gets off on the right foot initially, as Canada's did,, when the government regulates its financial system appropriately, and when the government is fiscally responsible, things go well. When those things don't happen, look out. Financial crises and generally bad economic conditions not only lead to hardship which is much more severe for some than for others, but also give us potential calamities in economic policymaking. Central banks and fiscal authorities panic, lunatic fringe movements gain traction, and economists seeking the vindication of their own ideas run around attacking each other.
Posted by Stephen Williamson at 12:04 PM