The employment report for June might make one somewhat pessimistic about growth in aggregate economic activity. Certainly some of the private sector economists surveyed here think so. The establishment survey showed a decline in seasonally adjusted employment (see the chart), and the household survey also showed a second monthly decline, seasonally adjusted (see the second chart). 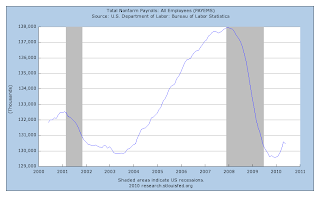 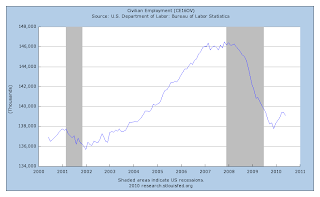 As usual, we have to be cautious about reading too much into one-month changes in time series that include a lot of measurement error. However, there appears to be accumulating evidence that things are not going so well.

But let's not be too hasty. Following the same approach as for last month's employment report, I looked at the 12-month growth rates in unadjusted establishment employment (see the third chart). 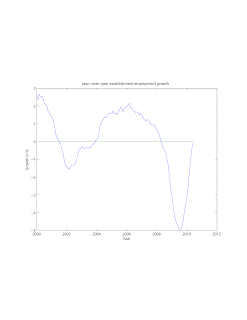 Now this looks more innocuous. Employment growth is still negative (just barely) year-over-year, but it is coming back strongly, and faster than was the case during the last recession.

Conclusion: How you filter the data matters a lot. There is no reason you should trust my year-over-year filter more than what the BLS uses (X11, X12, or some variant) to do seasonal adjustment, but at least the year-over-year filter is simple enough for a simpleton like me to understand exactly what it is doing. The more I think about seasonal adjustment, the less I trust it, particularly at times like this when all the unusual shocks hitting the economy are likely to confuse X11 (X12, or whatever). The reason we use seasonal adjustment is so that we can conveniently eyeball time series. If we could train ourselves to eyeball the unadjusted series, that would be great. I actually tried with the unadjusted employment series and just gave myself a headache. Maybe Jeff Miron can do this, but I can't.
Posted by Stephen Williamson at 12:00 PM