In New Keynesian theory, the basic idea is that the key inefficiency that monetary policy should be correcting arises from the sticky price friction. It is costly or impossible for firms to change prices frequently, and if there is general inflation or deflation there will be relative price distortions that cause welfare losses. In the New Keynesian framework, price stability will generally fix the problem, subject to some slippage due to what the central bank can and cannot observe at any given time. However, a particular problem, which I think is the key to how New Keynesians think about the current state of the world, is that the nominal interest rate cannot fall below zero (the "zero lower bound"). In a severe downturn, from standard intertemporal economics, efficient allocation of resources dictates that the real interest rate should be low, but this is not going to be consistent with price stability and a non-negative nominal interest rate. The best the central bank can do is to set its policy target nominal interest rate to zero, and the real interest rate is then too high relative to what it would be in an efficient flexible price world. This is essentially the story that Bob Hall told on Wednesday, and it's consistent with all or most of the New Keynesian work I have seen at the SED meetings here in Montreal.

From a New Monetarist point of view, a key element of the financial crisis relates to the scarcity of liquid assets. There is one type of liquid asset, which is outside money. Currency and bank reserves play their own unique roles as media of exchange in retail and large-scale financial transactions. A second important set of liquid assets are (in the US) Treasury securities, and various intermediated private assets that are implicitly traded through the exchange of various intermediary liabilities. When the Fed conducts an open market purchase of Treasuries, it swaps the first type of liquidity for the second. My view is that one reason this matters is that it increases the scarcity of the the second type of liquidity. The financial crisis also increased the scarcity of the second type of liquidity. For example, some mortgage backed securities, which had been widely traded in financial markets, and had served as collateral in various credit arrangements, dropped in value and were no longer traded. An increased scarcity of the second class of liquid assets is reflected in a lower real interest rate - these assets carry a larger liquidity premium. The correct central bank response to such a phenomenon, in additional to stepping in temporarily take up some of the intermediation functions that seemed to have shut down in the private sector, is to sell Treasuries, not to purchase them (which would increase the first type of liquidity, not the second). As you can see from this picture, 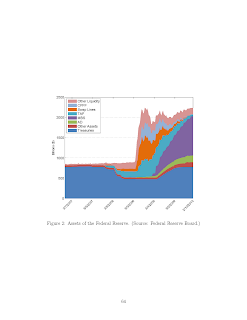 which I lifted from Curdia and Woodford, this is pretty much what the Fed did in the financial crisis. The Fed balance sheet expanded, but they actually reduced their holdings of Treasuries. The key point is that an important phenomenon in a financial crisis is a shortage of "type 2" liquid assets, reflected in a low real interest rate, rather than a real interest rate that is too high, as in New Keynesian theory.

By the way, thanks to Ricardo Lagos for helping me think through this.
Posted by Stephen Williamson at 7:37 AM