I had a long-run plan not to write about Krugman, and a short run plan for this morning to revise my paper, but I'm afraid both of those plans are in the toilet, after reading Krugman's NYT column this morning. Krugman's argument seems to be following:

1. Deflation is something we associate with bad outcomes - e.g. Japan in the 1990s and the Great Depression.

2. The inflation rate is currently very low in the US, and getting lower, and it will likely enter negative territory in the near future.

3. The Fed can and should do something about this, but it is ignoring the problem.

Is deflation a bad thing? Conventional monetary theory says no. Friedman's argument from his "Optimum Quantity of Money" essay is that the nominal interest rate represents a distortion which we want to get rid of. In general this implies that, on trend, prices should fall over time - trend deflation is optimal. Now, my deceased friend Bruce Smith was fond of calling the Friedman rule an embarrassment for monetary economics. All of these models are telling us the nominal interest rate should be zero forever, but no central bank actually does this. Further, as Krugman recognizes, deflation tends to be associated with bad stuff.

Some theories do, however, take us away from the Friedman rule as a policy prescription. The Friedman rule corrects a long-run distortion - anticipated deflation gives money an appropriately high social return. However, New Keynesians focus on the short-run distortions that come from sticky prices. Combine this with the long-run Friedman-rule distortions and you get optimal inflation somewhere between zero and Friedman-rule deflation, but it's still an optimal deflation. I got a similar result in a non-Keynesian model with a different kind of short-run relative price distortion. A recent idea I like better, which relates to this discussion takes account of the notion that we should take currency seriously. Currency, which finances most of the central bank's asset holdings in normal times, has many direct costs and indirect social costs associated with its use - counterfeiting, theft, and various other illegal activites. Inflation taxes these undesirable activities, which is good, but inflation is also bad for well-known reasons. In any event, taking account of the costs of using currency as a medium of exchange will give us an inflation rate above the Friedman rule rate, and could indeed tell us that the optimal inflation rate is positive, and that this optimal rate could fluctuate over time. 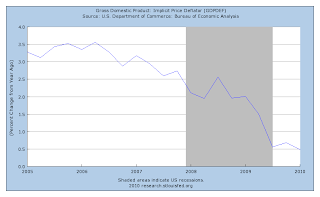 Indeed, the inflation rate, measured this way, is currently at 0.5%.

Why should the inflation rate continue falling? New or Old Keynesians might think that the output gap matters for the inflation rate, in Phillips curve fashion, and that the current large output gap (however measured) should ultimately produce deflation. But as Bob Hall reminded us in his Society for Economic Dynamics plenary talk last Thursday, recent output gaps appear to have had no effect on the inflation rate. Further, this evidence tells us that Phillips curve relationships are not useful for forecasting inflation. Certainly there is no quantity-theory-of-money inflation story that would cause us to forecast a further reduction in inflation to negative territory.

Now, even if we thought that the threat of deflation were looming, should the Fed be castigated for ignoring this? What could the Fed be doing to produce more inflation? Under the current regime (with positive excess reserves), the relevant policy rate in the US is the interest rate on reserves, which is currently 0.25%. The Fed could go to zero, but obviously that will not produce much inflation, and then we would only get a level effect on the price level. Krugman suggests the following:

But the message of Mr. Bernanke’s 2002 speech was that there are other things the Fed can do. It can buy longer-term government debt. It can buy private-sector debt. It can try to move expectations by announcing that it will keep short-term rates low for a long time. It can raise its long-run inflation target, to help convince the private sector that borrowing is a good idea and hoarding cash a mistake.

What about that? First, the Fed has already acquired a rather large quantity of long-maturity Treasuries and agency securities, and a very large quantity of mortgage backed securities. But, Krugman wants the Fed to buy more. Would this have any effect? Absolutely not. Swaps of reserves for private or public debt under the current regime (positive excess reserves) are essentially neutral (no effect on prices or quantities). The only instrument the Fed has currently for affecting the path of the price level is the interest rate on reserves, and that cannot go much lower, as Krugman points out. Should the Fed be committing to keeping short rates low indefinitely? Absolutely not, as there are inflation risks that Krugman does not recognize. Some people are worried about the maturity mismatch on the Fed's balance sheet. Others, including John Cochrane and Chris Sims, are worried about the inflationary implications of government deficits. These concerns may be unwarranted, as I'm now making the case that Krugman's deflationary concerns are unwarranted. In any case, we're in uncharted territory, and Krugman should not be so sure of himself.

Posted by Stephen Williamson at 8:16 AM