Now seems a good time to take stock of what is in the real GDP series, since 2nd quarter 2010 National Income Accounts data were just released, and there was a substantial revision to previous estimates. Following a time-honored macro tradition, I'll look at different approaches to separating the trend in the data from cyclical behavior, and see what that tells us.

One approach to detrending time series is the Hodrick-Prescott (HP) filter. If you don't know how to do this, the HP filter actually has its own Wikipedia entry. HP filtering basically fits a time-varying trend to the data, and there is a parameter you can set that governs the smoothness in the trend. Here is a picture of the HP-filtered US real GDP data. 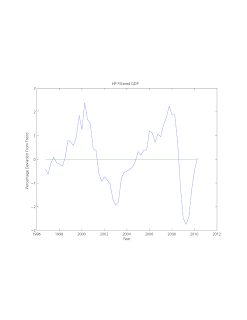 The HP filter tells us that the most recent turning point was a deviation from trend which was not much more severe than the last one, which occurred in first quarter 2003. Further, the current deviation from trend is zero - the recession has been and gone. Of course this does not agree with how anyone seems to be thinking about recent history. What is going on?

The next chart shows you the raw data: the log of real GDP and the HP trend. 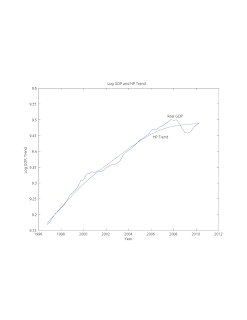 The HP filter is agnostic - it doesn't know economics and it has no axe to grind. It wants to see a decrease in the trend rate of growth to fit the data - indeed, the current rate of growth in the HP trend is close to zero. I certainly cannot say that the HP trend is the efficient path for aggregate output, but neither can I say it is not. Indeed, Kydland and Prescott were willing to write down a model in which they argued that the deviations from the HP trend could be characterized as efficient.

Now, what if I take another approach to thinking about the trend in real GDP? A remarkable feature of per capita real income for the United States is that the time series, going back more than 100 years, does not deviate much (excluding the Great Depression and World War II) from constant trend growth of about 2% per annum. The standard growth theory we use in macroeconomics will give us this type of growth path if total factor productivity (TFP) is growing at a constant rate. This is somewhat reassuring, though we are not too solid on why TFP should be growing at a constant rate in the most technologically advanced country in the world.

If I fit a linear time trend to the log of real GDP for the post-World War II period in the United States, I get the following picture, where I am just showing the most recent data (though the trend was fit for the period 1947Q1-2010Q2). 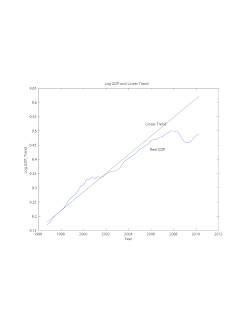 This chart gives us a different perspective relative to the last one. The trend growth rate in the post-World War II data was 3.28% per annum. From 1998 until late 2001, real GDP was above this trend, but has been below it since. Indeed, the difference between the trend and actual GDP begins to widen well before the onset of the most recent recession, and the current deviation is huge.

How huge? The next chart shows the percentage deviation of real GDP from a constant-growth trend. 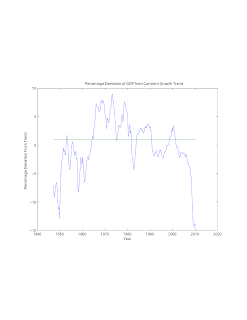 The current negative deviation is the largest we have seen in the post-WWII period - just short of 15%. Relative to previous experience, it's not impossible that real GDP could sometime return to the 3.28% growth trend line. This obviously requires a long period of sustained growth greater than 3.28%, but such growth rates were experienced in the early 1950s and in the 1960-1970 period.

But what if the US economy and the position of the US as a World technological leader has changed dramatically? Given the negative deviation of real GDP from the constant-growth trend during much of the last decade, we could think of that period as a period of depressed growth, where we never made up for what we lost in the 2001 recession, and then lost some more. Note in particular that GDP growth was buoyed up in 2000-2006 by the construction of houses which we had no business building. Once the housing sector fizzled, growth stagnated, and we all know what followed that.

Now, it is very important that we determine exactly what our future long-run growth prospects are. Is our long-run growth rate going to be lower than it was in the past? Will we ultimately converge to a growth path that is below the post-WWII trend but with roughly a 3.28% growth rate? Are there important inefficiencies in the US economy that are impeding growth (housing and mortgage market intervention and subsidies for example)? If so, we should figure this out, and do something about it.

My worry is that we are too focused on the last month's retail sales numbers, or last quarter's GDP report, and what the federal government or the Fed can do to "solve" short-run problems. We are not paying enough attention to what really ails us.
Posted by Stephen Williamson at 11:08 AM